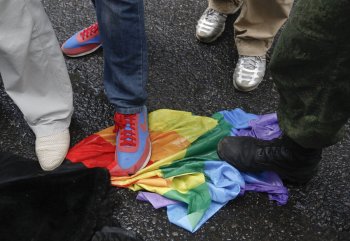 While people of all faiths and none have campaigned for and against LGBTQ rights, the merger of religious and state power has always been the greatest threat to LGBTQ rights around the world and turns bigotry into discrimination, argues NSS president Terry Sanderson.

The International Day Against Homophobia (IDAHO) aims to draw attention to the daily acts of cruelty meted out to LGBT people around the world. It wants to shame the dictators and the religious fanatics, the demagogues and also those duly elected representatives who work tirelessly to humiliate, violate and occasionally kill LGBT people.

While here in Britain, and in many parts of the West, gays have had many of the restrictions and discriminations against them lifted, in other parts of the world the situation seems to be getting worse.

In the Islamic world in particular the lethal aggression towards homosexuals is increasing in line with religious fanaticism.

In the USA one state after another enacts legislation that will rob gay people of their rights and render them second class citizens.

In Russia the state and the Orthodox Church draw closer and gay people feel the consequences.

In China, a nascent gay movement has been crushed by authoritarianism.

In India, the power of the Hindu nationalists has seen recent progressive legislation reversed.

In Poland, and other parts of Eastern Europe, the Catholic Church still has the power to impose itself on the law-making process, and so progress for gay rights is halted in its tracks. In Italy the Vatican still wields huge political power and has stood in the way of civil partnership legislation for many years. However, it has been over-ruled by the European Court of Human Rights and this week Italy has been compelled to introduce same-sex civil partnerships.

Catholic Church representatives say this is "creeping fascism" - which is rich coming from a church that signed a very lucrative concordat with the fascist government of Benito Mussolini (still in effect today and still rendering huge amounts of Italian taxpayers' cash into Vatican coffers).

Most of these regressive initiatives are propelled by religious beliefs. Evangelical Christians have shown skill and determination in manipulating the political process in America, getting themselves elected to office and then delivering the spiteful goods to their religious supporters.

I was touring the southern states of the USA earlier this year at a time when North Carolina was enacting the notorious House Bill 2, which robbed gay people of their rights at work and trans people of their dignity. As we drove through the towns and cities in that state, it seemed that almost every other building was a church, every billboard had a religious slogan, every car declared the driver a soldier of the Lord.

Even the diner where we had lunch had Bible quotations on the menu and religious pictures in the lavatory.

In many African countries there is tension between Christians and Muslims. But churches and mosques can unite over one thing – their hatred of gay people. They demand punitive punishments for gay sex and governments eagerly respond by enacting harsher and harsher laws.

Even in Britain there is still a small, but vociferous evangelical rump that ceaselessly tries to reverse the gains that the gay community has made. One court case after another claims that Christians are being forced to act against their beliefs by having to treat gay people as equal citizens.

These self-righteous activists have not succeeded to any significant degree yet, but they never stop pushing – and who knows what the future holds as politics become scarily unpredictable.

So, on this year's International Day Against Homophobia we find some gay people – residing in the enlightened parts of the world - basking in the reassuring light of hard-won equality while others, in nations still dominated by religion, are still living in a dark and threatening hell.

Violence against and even murder of gay people is a daily occurrence somewhere in the world. Hatred is the hourly lot of some.

Some Christians, Muslims and Jews insist that their holy books demand that gay sex and those who practise it be rejected and punished. Not all believers want to carry these biblical and koranic injunctions to their literal conclusion, of course, but too many of them do. Literalist religious believers seem ever able to pick and choose which laws of their holy books they want to observe – and always have a justification for the ones they don't.

Despite the fact that almost all the discrimination that gay people suffer has a religious basis, we still have gay people who make excuses for it.

We are told, for instance, that a disproportionate number of gay people are priests and vicars who seem able to support the homophobia pedalled by their superiors.

There are gay people in the pews, donating money and resources to their oppressors.

Personally I have never been able to understand how any self-respecting gay person would want to be part of an institution that is actively hostile to them, that wants to rob them and others like them of the right to love.

If there is a choice, why stay?

For some, of course, the religion in which they have been raised is often deeply entwined with their ethnic and cultural identity: leaving is a much more complicated, frightening and sometimes dangerous route. Casting off religion for some people may also mean casting off family and community support, leaving them to face the racism of wider society on their own. It might also lead to claims of "apostasy" and in some places that can be fatal.

I have met plenty of Muslim and Hindu and Sikh gay people – male and female - who have been compelled to marry in order to please their families and their cultural traditions. They are unhappy, their spouse is unhappy, but the imam or the priest is satisfied, and so is the 'honour' of the family. And for some that's all that seems to matter.

I have sympathy for the plight of gay people caught up in such traditionalist, unyielding societies. But I rage against the religion that has imprisoned them in this way.

The International Day Against Homophobia hopes to raise the issue of the worldwide savagery that is directed at LGBT people.

It needs to clearly acknowledge and challenge the source of so much of it.

As Iran hangs young gay men from cranes and Islamic State throws them from high buildings, while Putin's thugs beat people on gay pride marches and Nigeria throws gay people into jail for long periods, we must speak the truth: religion is the enemy of gay people, it has declared war on our rights and even on our lives.

The supposedly benign Church of England tried to derail gay marriage legislation - and just about every other piece of progressive reform in relation to gay rights. The Catholic Church is led by a fork-tongued phony who promises liberality but never delivers it.

The ex-gay movement wants to eradicate homosexuality through prayer and "counselling" and in the process damaging the minds of countless men and women who have been brainwashed into believing their sexuality is evil.

The openly murderous thugs of al-Qaeda and ISIS are at least honest about their desire to kill gay people, whereas the evangelical-controlled Tea Party in the USA undermines gay rights bit by bit, claiming that somehow their religious liberty is compromised by extending freedom to gay people.

The International Day Against Homophobia is an opportunity for the gay community around the world to call out its religious oppressors and acknowledge that organised religion has declared war on gay rights.

It's time for the gloves to come off.

His new book The Adventures of a Happy Homosexual; memoirs of an unlikely activist is now available.