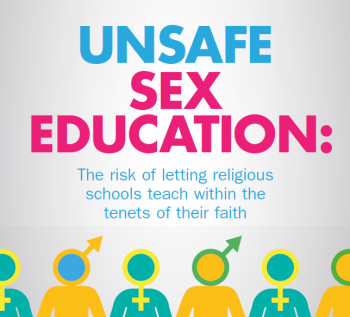 The NSS report, Unsafe Sex Education: The risk of letting religious schools teach within the tenets of their faith, found that 77% are instead teaching the subject in accordance with religious scripture.

The report drew on a study of over 600 state secondary schools. Out of the 334 schools where an SRE policy was found, 257 indicated that SRE is delivered according to the teachings of the school's religious ethos.

Many faith schools explicitly teach that same-sex relationships are wrong and criticise sex outside of marriage. Some condemn contraceptives and abortion and teach taboos around menstruation.

These teachings contradict advice from healthcare and education professionals and are inconsistent with the Equality Act 2010, which protects people from discrimination.

The NSS has written to Damian Hinds, the education secretary, to highlight the findings and to urge him to resist pressure from religious groups for leeway on the teaching of the subject.

"Government policy must endeavour to ensure all pupils at all schools, regardless of their religious ethos, are entitled to the same basic level of SRE," chief executive Stephen Evans wrote.

"We fear that your current approach will lead to unequal education and undermine efforts to ensure that every child has access to age appropriate sex and relationships education, in a consistent way."

In 2017 the government legislated to require all secondary schools in England to teach Relationships and Sex Education (RSE) but said "faith schools will continue to be able to teach in accordance with the tenets of their faith".

The NSS's report found that several schools have policies which say homosexual acts are wrong or homosexuality is "disordered". Many, particularly Catholic schools, try to justify this position by drawing a distinction between homosexuality as an orientation and homosexual activities.

For instance the policy of St Patrick's Catholic College, a Catholic academy in Stockton-on-Tees in County Durham, says: "Being a homosexual person is neither morally good nor morally bad; it is homosexual genital acts that are morally wrong."

The policy of All Saints Catholic School and Technology College in Dagenham in Essex says the Catholic Church "does not believe that sexual acts between persons of the same sex are morally right in principle". But it adds that "the possibility of repentance and forgiveness for sexual sins is open to all".

Several other faith schools, including Church of England schools, do not explicitly teach that homosexuality is wrong but appear to imply homosexuality is a negative phenomenon – for example, because they teach about LGBT+ issues mainly by teaching about AIDS.

Catholic schools often stress that Christian marriage is a sacred part of "God's plan" – excluding other forms of marriage, including same-sex marriage. Many openly state that this means sex outside Christian marriage is wrong. For instance St James' Catholic High School in north-west London says: "God's holy gift of sexual intercourse is reserved for the permanent commitment of marriage, expressive of the bond of mutual love and open to God's gift of new life."

One Muslim school's SRE policy discourages the use of tampons. The Al-Hijrah School in Birmingham says they "may not be appropriate due to insertion".

In many faith schools SRE is delivered through the religious education curriculum or its equivalent.

The SRE policy was secular at just one of the 184 Catholic schools which had policies on their websites. There was evidence that religion had influenced SRE policies, where they were available, in more than half of Church of England schools and 16% of schools with a non-specific Christian designation.

Religion had influenced SRE policy in five of the six Jewish schools where policies were available, although its influence was generally less explicit than in Catholic schools. Al-Hijrah School was the only Muslim school where an SRE policy was available.

"All of our students should have the right to access education that will give them clear and accurate information on topics that are so important to their wellbeing. Our report demonstrates that state-funded faith schools are letting young people down in this respect, and it is important that we protect their right to impartial Sex and Relationships Education.

"Allowing faith schools leeway to teach about sex and relationships in accordance with their faith will undermine plans to ensure that every child has access to age appropriate Sex and Relationships Education, taught in a consistent way. We therefore urge the Department for Education to resist pressure from religious groups to provide wiggle room for faith schools to promote religious ideology in SRE, or avoid aspects of SRE that conflict with their worldview."

The government is now preparing to respond to a consultation on changes to the teaching of SRE. The NSS is calling for these topics to be taught in a consistent and impartial way, based solely on recommendations from experts.

In its letter to Hinds the NSS recommended that: SRE must be based on recommendations from healthcare and educational professionals, not religious scripture; it must be consistent; it must be impartial; it must meet the requirements of the Equality Act; all state schools must visibly carry SRE policies on their websites; and the RE curriculum should not be the main mode of delivery for SRE.