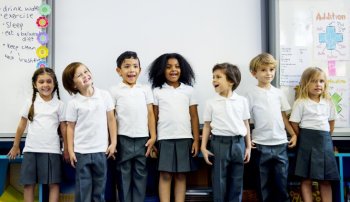 Last week the government published its 'inclusive Britain strategy', setting out a range of actions to tackle racial and ethnic disparities and promote fairness.

A glaring issue overlooked is that of faith schools. Robust evidence shows that faith-based education builds discrimination into the system and undermines social cohesion by segregating pupils on religious, ethnic, racial and social grounds.

A third of state-funded schools across Britain are faith schools. The vast majority are Christian, and many of these operate discriminatory admissions policies. The impact of this is being keenly felt by families in Liverpool, where parents are struggling to access local schools, and youngsters are facing long journeys because nearby places are reserved for practicing Christian families.

Dr Amina Elmi from the Granby Somali Women's Group has been lobbying for a change in schools' admissions, arguing that admission policies are stopping "people from a certain community - from a certain race or faith - from getting into the schools in their locale".

The problem is acknowledged by local councillor Tom Logan, cabinet member for schools, who points to "a cluster of schools with a religious element to their admissions policies so if you're not Catholic or from the Church of England or you don't want a faith-based education, you'll find it difficult to get a place". Many parents up and down the country will have faced a similar situation.

The government's inclusive Britain strategy is focussed on addressing racial and ethnic disparities, but it's clear that a broader review is needed to address the myriad ways faith schools at best fail to foster, and at worst actively undermine, inclusiveness.

But there are encouraging signs that an increasing number of local people are willing to call out discriminatory admissions and make some noise. One such group is Fair Schools for Oldham, a group of parents, teachers, and local residents who got organised after they realised their new "multi-faith, multi-ethnic, inclusive school" was going to reserve 50% of its places for children of families that practice a faith – meaning half of its places will be closed to many local children. The group says it wants everyone to have equal access to good quality local state-funded schools, "regardless of their social class, religious faith, ethnic origin, or postcode".

Parents in Wigan are also fighting the unfairness of faith-based education. The council's plans to close a community school there will leave many families with no option other than a faith school. This in an area where the high prevalence of faith schools means 90% of families already face high or extreme restrictions on the choice of a non-faith school. Three in ten families across the country face similar restrictions.

Even when children are given a place in a faith school with a religious outlook they don't share, the faith ethos permeates all aspects of school life, making it far from an inclusive environment for many. Even non-faith-based academies and community schools are under a legal obligation to provide a daily act of broadly Christian worship, further undermining inclusivity. The only schools that do a good job of holding inclusive assemblies are those that ignore the law and omit the worship.

But the inclusivity problems in our schools go further than alienating children from different religion or belief backgrounds.

The disinviting of a gay author from a state-funded Catholic faith school in Croydon this month highlights how religious control of schools can negatively impact on inclusivity for LGBT pupils and families too.

The reason given by the Archdiocese of Southwark for cancelling the visit of award-winning children's author Simon James Green was that his representation of LGBT characters and support for LGBT rights was in conflict with their religious ethos.

The diocese says: "At the heart of every Catholic school sits the person of the Lord Jesus Christ and the teachings of the Catholic Church." Herein lies the problem. According to the Catechism of the Catholic Church, "homosexual acts" are "acts of grave depravity", "intrinsically disordered" and "contrary to the natural law." Our publicly funded schools shouldn't be agents of religious dogma.

The National Secular Society has long argued the requirement for faith schools to teach RSE and PSHE in accordance with their religious ethos creates significant tension with their duties under the Equality Act – and provides cover to marginalise LGBT pupils and stigmatise same-sex relationships.

NSS research revealed 77% of secondary faith schools in England are delivering Relationship & Sex Education according to the teachings of the school's religious ethos, rather than in an impartial manner. Many Catholic schools' RSE policies often explicitly denigrated same-sex relationships, or otherwise marginalised or excluded discussions of LGBT issues and representation of LGBT individuals.

Chair of the Catholic news weekly The Tablet Mike Craven says the treatment of Simon James Green "reinforces public perceptions of Catholics as prejudiced and Catholic schools places where teachers are second-guessed by bishops and bureaucrats and laity are ignored and marginalised." He says it will lead taxpayers and politicians to question why hundreds of millions of pounds of public money are being spent to allow a religious institution to reinforce public prejudice against a vulnerable group of young people." Quite.

He questions whether the prohibition on the physical expression of love outside heterosexual marriage is still tenable. That's a matter for the Catholic faithful and the Church. Religions will always have their internal theological disputes. These should be played out in churches, mosques, synagogues and temples, not schools.

There's no shortage of people who claim that religion is a force for good. And in many ways, it can be. But that's not the whole story. It can also be intolerant, divisive and discriminatory.

State education can play a vital role in creating a fairer, more open and more inclusive society. To achieve that, the schools we all fund should be equally welcoming to children of all religion or belief backgrounds, ethnicities and sexual orientations.

An inclusive Britain begins with inclusive schools. We need an education system that, at its core, promotes free inquiry, equality and inclusivity. Organised religion's continuing role in state education is a glaring impediment to that. That's why religion and state education must be kept separate.