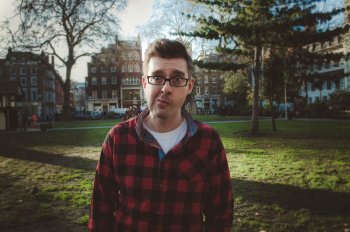 The National Secular Society has said religious control over state schools must be challenged after a Catholic diocese cancelled a talk by a gay author.

Simon James Green (pictured), an award-winning children's author, had been due to visit John Fisher School in Croydon on Monday. He was scheduled to hold talk about his book for teenagers Noah Can't Even, which features a gay protagonist, to commemorate World Book Day.

But his visit was cancelled after Southwark Archdiocese, which oversees the Catholic secondary school for boys, intervened and removed school governors supportive of Green.

The NSS said the incident "highlights a broader problem of faith schools stigmatising same-sex relationships" and called for an end to public funding for such schools.

The diocese's intervention follows a campaign by the website Catholic Truth featuring a call to cancel Green.

It said it was a "major problem" that boys are "misled into accepting, as normal and good, sexual behaviour which is condemned by Christ's Church".

A few days before the talk, the Education Commission of Southwark Archdiocese published a statement saying it had recommended the school's leadership cancel the visit, because it fell "outside the scope of what is permissible in a Catholic school".

But the school's leadership team decided to go ahead with the visit, with support from the governing body.

Following this decision, John Fisher's chaplain James Clark sent an email to parents in protest. He said: "No one is denying the existence of those who have differing views and beliefs to ourselves, the event is about promoting the literature of a lifestyle choice that is contrary to the teachings of Jesus Christ, and therefore has no place in a Catholic school."

According to Green, the talk was to cover "being an awkward teenager, the power of comedy, my career, and about an 8 min section of the importance of LGBT [representation]".

The decision to cancel Green has also been condemned by staff at John Fisher School, in addition to members of the NEU and NASUWT unions.

A separate visit by Green to St John's Primary School in Gravesend, which is controlled by the same diocese, was also cancelled. The talk was to be about Green's books for younger children "which contain no LGBT content whatsoever".

Green said: "All I do with my books and school events is encourage reading for pleasure, acceptance of difference and celebrate being who we are."

He added: "You can't be made gay by reading about gay characters in books. If you're LGBT, you're LGBT. I want LGBT kids to find comfort and understanding in my books, and non-LGBT kids to understand other lives, empathise, see we're really not so different."

The NSS has previously highlighted how faith schools, included those that are state-funded, are permitted to teach stigmatising ideas about gay people and same-sex relationships.

NSS research in 2018 found examples of Catholic secondary schools calling same-sex relationships "unacceptable" and "against the natural order", and gay people "objectively disordered", in their relationships and sex education policies.

The NSS has also highlighted how exemptions in equality law may enable faith school to harass pupils who are LGBT+ in its 2020 report on the Equality Act 2010.

NSS chief executive Stephen Evans said: "If a visit from one of the UK's leading writers of LGBTQ+ teen fiction is considered 'outside the scope of what is permissible in a Catholic school', the state should reconsider publicly funding such schools.

"The disturbing behaviour of this diocese highlights a broader problem of faith schools stigmatising same-sex relationships and therefore contributing to a climate where many young LGBT people are growing up feeling ashamed or frightened about who they are.

"Our own research has shown that a significant number of faith schools promote the idea that same-sex attraction is 'morally wrong', 'disordered' or a 'lifestyle choice'. This isn't acceptable in a publicly funded school. Regardless of their sexuality or the sexuality of their parents, children of every religion and belief background should be entitled to study in a welcoming and accepting school."