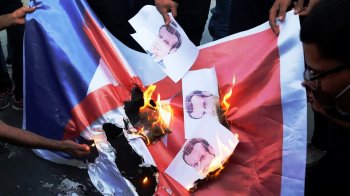 France has understandably reacted to the atrocious killing of teacher Samuel Paty, who was targeted for showing Charlie Hebdo cartoons to his students, by defending freedom of expression.

The cartoons have been publicly displayed, as a sign that the assassin's veto shouldn't prevail. Emmanuel Macron said he "understands" Muslims' "feelings about the caricatures", but he would "never accept that someone can justify the use of physical violence because of these cartoons".

In several Muslim-majority countries, there has been much greater outrage at this defence of a fundamental principle than at the original killing. French items have been taken off shelves amid widespread calls for a boycott – endorsed by Turkey's president, tens of thousands of marchers in Dhaka, and many others. Pakistan's prime minister has hit out at Macron for "attacking Islam". Egypt's president said free expression "should stop when it comes to hurting the feelings of one and a half billion or more Muslims".

Muslim protesters also demanded "respect for the prophet" outside the French embassy in London. And elsewhere there's been another depressingly predictable sight: liberal equivocation on whether fundamental freedoms are worth defending in the face of intimidation and murder.

Canadian prime minister Justin Trudeau said his country would "always defend freedom of expression", before adding that "freedom of expression is not without limits". In response to this effort to enforce a blasphemy code, the leader of a liberal democracy invented an apparent obligation "not to arbitrarily or unnecessarily injure those with whom we are sharing a society and a planet".

Meanwhile the head of a UN body called the Alliance of Civilisations, Miguel Ángel Moratinos, made a "call for mutual respect". Behind this pleasant-sounding title lay familiar apologetics about "inflammatory caricatures" which have "provoked acts of violence". That was followed by a request for freedom of expression to be "exercised in a way that fully respects the religious beliefs and tenets of all religions". Then came a claim that "insulting religions and sacred religious symbols provokes hatred and violent extremism leading to polarisation and fragmentation of the society".

Sections of the western press have fallen into a similar pattern, showing little appetite for understanding the problems of Islamism or jihadism and instead asking again what France had done to deserve this. A since-pulled piece in Politico said the reason why France is targeted "over and over again" by violent extremists was "simple": its "extreme form of secularism and its embrace of blasphemy" had "fuelled radicalism among a marginalised minority".

A writer in The Independent accused Macron of "using this period of justifiable fear and anger to support those who seek to portray Muslims as backward, moronic and – most terrifying of all – irrevocably savage". (It's worth pointing out, as Alex Massie did in The Spectator last week, that this is an unfair characterisation of Macron's response.) Once again Charlie Hebdo was painted as a Muslim-hating rag; by defending its right to publish, Macron was "suggesting specifically that Muslim hate is apparently desirable". And don't forget, the writer mentioned, that "the Nazis infamously used cartoons as part of their propaganda war against the 'Untermensch'".

In the face of terrorism it remains legitimate to ask potentially uncomfortable questions about why it's happened and how best to react. It's legitimate for those defending human rights to highlight inconsistencies and imperfections in the way they're upheld. But much of the liberal response to the latest events in France – even where it hasn't engaged in ludicrously hyperbolic comparisons – has brought a reflexive shift to a comfort zone where there's no need to confront hard questions about Islamist separatism and supremacism.

No matter how absurd the comparison between the actions of the two, this places the onus to change on a liberal democracy which, imperfectly but still roughly, upholds human rights norms. It hands the murderers, theocrats and censors the power to keep making demands.

And as in 2015, in some cases the response has again slipped into blaming Charlie Hebdo and those who defend its right to publish. As well as being spectacularly wrong on moral grounds, calls for effective curbs on free speech very much miss the point. Last week three worshippers were murdered at a church in Nice. Was this – or the similar murder of a priest in Rouen in 2016 – also the fault of cartoonists who routinely mocked religion, including Christianity? Should French secularism take the blame for attacks in Vienna, Kabul and Pakistan in recent days?

If those who give France a telling-off for refusing to give in are well-intentioned, they should also realise that their arguments are counter-productive. Essentialising Muslims, and mainstreaming the idea that they expect Islam to be given special protection, is a gift not only to Islamic reactionaries who would like this to be true, but to anti-Muslim reactionaries too. In the meantime secularist Muslims are left on the margins of the discussion.

At the moment many of those Muslims are speaking out. In a call published in Le Monde this week, a group of Muslim intellectuals called for the end of the boycott of France and corrected several misrepresentations of events there. In this morning's i, Yasmin Alibhai-Brown noted the similarities between the narratives of Muslim and anti-Muslim reactionaries. And she made an impassioned plea to Muslims to "honour the victims of jihadism and affirm our allegiance to religiously neutral governance".

Muslims aren't the only ones who should take note. We don't need to, nor should we, ask liberal democracies to dilute their commitment to fundamental freedoms in the face of jihadist murder and Islamist intimidation.