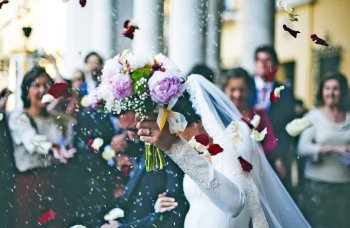 A new High Court challenge to get humanist marriages legally recognised in England and Wales gives us an opportunity to consider how to reform our marriage laws for greater simplicity, equality and freedom, says Megan Manson.

Should humanist marriages be legally recognised? That is the question put before the High Court today in a landmark case.

According to Humanists UK, a humanist wedding is a non-religious ceremony that is "reflective of the humanist beliefs and values of the couple, conducted by a celebrant who shares their beliefs and values." The six couples who have brought the case to court say they are being discriminated against because this ceremony does not have the same legal recognition in England and Wales afforded to some religious groups. They seek a similar arrangement available to Quakers and Jews, who enjoy considerable freedom from legal regulation of their marriages.

The case has opened a welcome debate on marriage laws in England and Wales, and addresses the pressing need for reform. It's not just humanists who are unhappy with the status quo. Within Muslim communities, there is very real confusion as to what is and isn't a legally recognised Islamic marriage. This has resulted in Muslim women finding themselves without the right to financial remedies if they 'divorce', because the courts never recognised they were married in the first place.

Clearly, our current marriage system is no longer suited to our increasingly irreligious and religiously-diverse society.

Marriage laws in England and Wales are over-complex and over-dependent on the religious identity of the couple getting married. There are separate marriage laws for Anglicans, Jews, Quakers, members of other religions, and those who do not want religious marriage. This is not conducive to a society where all are treated equally before the law regardless of religion or belief, or one where spouses frequently have different religions or beliefs from each other.

Moreover, the legality of marriages in England and Wales depends heavily on where the marriage takes place (except in the case of Jews and Quakers, who may marry anywhere). This is a relic of the past when marriage was heavily governed by the Church of England, which now significantly hinders the freedom of couples to marry where and how they wish. The centrality of location in marriage law also leads to inequality, with approved premises for civil marriages having much greater financial burdens than religious marriage venues.

Giving legal recognition to the marriage rites of increasing numbers of different communities will do little to solve these fundamental problems. It will simply build additional complexity and identity-based rules into our already bloated marriage laws. What we need is 'one marriage law for all.'

What the various forms of marriages in England and Wales have in common are preliminaries, some form of documentation and a trained official registrar or celebrant. It makes sense for the requirements of a legally-recognised marriage to be limited more or less to these elements. The location where the marriage takes place should no longer be a consideration. This would give couples much greater freedom to have a wedding that suits their practical, philosophical and spiritual needs. The success of Jewish and Quaker weddings, in addition to weddings in Scotland which are also not dependent on location, demonstrates there is no real need for marriage to be tied to a particular venue.

Far from resulting in identical weddings for everyone, a single marriage law requiring the same basic legal elements would in fact give all couples, regardless of their religion or belief, the flexibility to have a truly bespoke wedding unique to them.

Combined with improved civic education about relationships, reforming the civil institution of marriage would also help alleviate the problem of the legality of Islamic marriages. A simplified marriage law requiring the same documentation and legal process for all would help to make it clear to every couple what is required for the courts to recognise the marriage. Dr Vishal Vora, Research Fellow at the Max Planck Institute for Social Anthropology, came to similar conclusions in an article on the legality of Islamic marriages published recently in the Journal of Muslim Minority Affairs:

"However, a question needs to be kept in the foreground: should the law really be changed for one minority religious group, when all other such groups are able to follow the law, despite its complexity? The answer is probably no. Nevertheless, the law would most certainly benefit from an update, possibly incorporating other kinds of marriage, such as same-sex marriage. A move away from the historical roots in the canon law of the Church and a re-evaluation of the buildings-based nature of defining marriage will benefit all of society, and not just one specific group."

The Law Commission is currently exploring various possibilities for reform "that allows for greater choice within a simple, fair, and consistent legal structure." However, the limited Terms of Reference for their deliberations mean any recommendations are likely fall short of what is required – which makes humanists' eagerness to force the issue in the courts understandable.

But secularism is about finding solutions that can unify everyone in a diverse society, rather than split them into increasing numbers of groups with their own rules and competing interests. And perhaps no institution represents the importance of unity and bringing people together better than marriage. It's time to reform our marriage laws to bring us all together as equals in society.

Image by Pexels from Pixabay