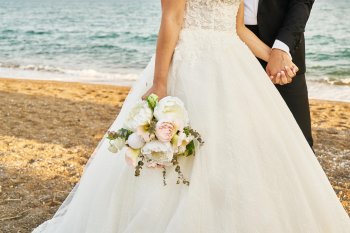 The Law Commission has published a report proposing the removal of restrictions on where and how both civil and religious weddings take place.

The proposals are in line with NSS recommendations made in their response to the commission's consultation last year.

The Law Commission is a statutory independent body which keeps the law in England and Wales under review and recommends reforms where it considers them necessary.

The NSS has argued for comprehensive reform of marriage law to ensure greater clarity and fairness for all couples in recent years, and has lobbied the Law Commission as part of this process.

The commission recommends introducing an officiant-based system for the legal recognition of marriage, to replace the current restrictive building-based system.

This means all weddings would be legally permitted to take place in a safe and dignified location chosen by the couple, including outdoors.

The proposals would enact several other measures which the NSS has lobbied for:

They would also allow weddings conducted by non-religious belief organisations, such as Humanists, or independent celebrants to be recognised, if the government decided to permit them.

The commission said the change will remove "the many unnecessary restrictions in the current law" and "address unfairness in the treatment of different group".

NSS: "Greater freedom, equality and fairness for all"

NSS chief executive Stephen Evans called the recommendations "a very good set of proposals that could make marriage ceremonies more personal and bring about greater freedom, equality and fairness for all."

He said: "The proposals are very much in line with our recommendations and reflect the overwhelming public demand for a modern approach to marriage.

"The government should accept these recommendations and work to making them a reality in law."

Image by Engin Akyurt from Pixabay