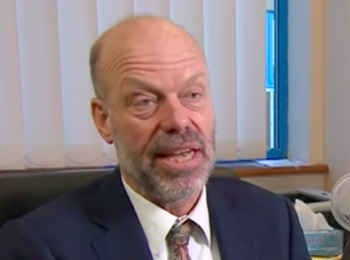 The General Medical Council has decided not to pursue a case against a GP who was accused of pushing religion on a vulnerable patient. Stephen Evans warns against allowing this exploitative behaviour.

Earlier this year the National Secular Society was contacted by a member of the public who was concerned about an acquaintance being treated at Bethesda Medical Centre in Margate in Kent.

We were told the acquaintance was "highly vulnerable" and was being made to feel uncomfortable because a GP at the practice, Dr Richard Scott, was imposing his religious views during appointments. We were told the patient did "not feel able to express discomfort at the use of prayer" and it was "not possible for this patient to raise the matter formally, or to change GP practice".

We decided to raise this with the medical regulator, the General Medical Council. The GMC then opened an investigation into Dr Scott. Last month the GMC told him it would take no further action against him, and this weekend The Sunday Times reported on the case – without coming to the NSS to seek our side of the story.

If you believe Scott's take – which is backed up by groups such as Christian Concern – he has been vindicated while our decision to raise the case has been revealed as vindictive and unfounded. This is a convenient narrative, but it skirts past many of the facts of the case.

There were good grounds for a complaint against Dr Scott. The GMC had already warned Scott in 2012 after he distressed a patient by trying to persuade him to change his religion. That included telling the patient "the devil haunts people who do not turn to Jesus". In its determination on the case the council said Scott's conduct constituted "a significant departure" from the principles outlined in its professional guidance.

The warning expired in 2017. And the latest anonymous complaint was consistent with a pattern of behaviour which suggests Scott has learnt nothing from it. He appears to hold the GMC in contempt and is continuing to push his religious views on patients.

During an interview on BBC Radio 4 in January he described the GMC's warning as "disgraceful". He said drug addiction was a "relevant circumstance" for using faith as treatment. He said he had 'converted' a patient to Christianity very recently. Worst of all, he said the most common time he introduced faith into consultations was "with dealing with people with depression or anxiety", adding: "Most people are desperate, they'll at least listen."

With this in mind we asked the GMC to inform us how it planned to ensure Dr Scott met the standards required of a doctor, and to protect the right of patients to access health care without evangelism.

The complainant's wish to remain anonymous meant the evidence we provided was insufficient to prove that Dr Scott practised in breach of the council's guidance. But the guidance exists to ensure doctors observe their professional duty of care to patients, and it should be upheld.

The GMC prohibits doctors from expressing their beliefs to patients in ways that exploit their vulnerability or are likely to cause them distress. The guidance is also clear that doctors should only discuss their personal beliefs if a patient asks directly about them, or indicates they would welcome such a discussion. They must not put pressure on a patient to discuss or justify their beliefs, or the absence of them.

This is all reasonable. Patients should expect to access health care without having to put up with evangelism or having someone else's religious beliefs imposed on them. And conversion activity that targets people who are ill or vulnerable is exploitative; patients should be protected from it.

It's therefore troubling that the GMC seems unable or unwilling to uphold its own rules. Dr Scott's public statements make clear that he feels no need to comply with the ethical standards required of a doctor.

Even after previous warnings Dr Scott appears to remain totally unrepentant and blind to the potentially damaging effect of his actions.

He now says the result of the case is "encouraging to people like myself to share faith and pray with our patients". And he asks: "When we come to the pearly gates, who opens the door? It's not the General Medical Council… it's Jesus Christ."

Perhaps medical regulators aren't going to open the gates in the afterlife. But in the meantime they have a job to do, which involves ensuring proper standards and conduct for GPs. Even if it upsets some vocal religious lobbying groups, that's what they should do.