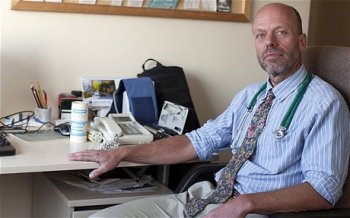 A Margate GP who was accused of distressing one of his patients by inappropriately trying to evangelise him has received a warning from the General Medical Council (GMC). If any further complaints are made about him, he risks being struck off the medical register.

Zealous Christian Dr Richard Scott told the GMC that "doing God is good for your health" but he was adamant that he had not overstepped the mark on account of his religious convictions. The GMC panel disagreed.

In delivering its determination, the chair Dr Chrisopher Hanning said: "While the allegations relate to what occurred on a single occasion your actions nevertheless constitute a significant departure from the principles in Good Medical Practice. The Committee considers that it is appropriate, proportionate and in the public interest for the protection of the reputation of the profession to issue you with a warning.

The Committee directs that the following warning be attached to your registration:

"During a consultation with a patient in August 2010 you expressed your religious beliefs in a way that distressed your patient.

You subsequently confirmed, via National media, that you had sought to suggest your own faith had more to offer than that of the patient.

In this way you sought to impose your own beliefs on your patient. You thereby caused the patient distress through insensitive expression of your religious beliefs.

Your actions were in direct conflict with the GMC's supplementary guidance: Personal Beliefs and Medical Practice. This states in paragraph 19 that:

The incident occurred in August 2010 when a 24 year old non-Christian man, known as "Patient A" – who was described as "psychologically troubled" – came to the surgery for a consultation."

Dr Scott claimed that at the end of the consultation he made a "gentle offer" to the patient to broach the subject of faith and was told "go for it". But this was not the version of events that was described by the patient and later his mother complained that Dr Scott was imposing his own views on patients, which is against GMC rules.

Dr Scott immediately claimed that it was another example of the "marginalisation of Christianity" and his case was taken up by the Christian Legal Centre, which has brought many of the recent notorious court cases seeking special treatment for Christians in the workplace. Dr Scott refused to accept a warning from the GMC and opted to go for an oral hearing.

Patient A was reluctant to give evidence at the hearing but was allowed to do so over the telephone.

In the interim, Dr Scott and the Christian Legal Centre embarked on a misinformation campaign in which he was portrayed as another victim of the persecution of Christianity. Newspapers such as the Daily Mail and the Daily Telegraph told his story from a distorted and one-sided perspective. Dr Scott gave interviews on Radio 2 and Radio Five Live in which he admitted he had told the young man that Christianity was a better religion than his own. The National Secular Society drew the GMC's attention to these interviews and provided transcripts.

As a consequence, Andrea Minichiello Williams, CEO and chief propagandist of the Christian Legal Centre, was barred from the hearing.

At the renewed hearing, which was held this week in Manchester, Dr Scott gave prolonged testimony as to the efficacy of Christianity in the treatment of medical conditions. (More details.)

However, his surgery, The Bethesda Medical Practice, is described as "an "expressly Christian doctor's surgery" – even though it is paid for by the National Health Service to serve the whole community.

Reacting to the findings, Dr Antony Lempert of the Secular Medical Forum said:

"We welcome the GMC's determination making it clear that doctors — whether religious or not — must set aside their own personal beliefs and not evangelise when treating patients, far less suggest that they adopt a different belief. Doing so needlessly puts patients in a difficult position.

"There is no reliable evidence — whatever may have been claimed at this hearing — that any belief system has benefited health. Basing treatment on this premise is therefore potentially harmful to the patient and to the doctor-patient relationship.

"Patients consult their doctors for their professional expertise and not for their doctor's religious beliefs. For GPs to share their own religious beliefs during consultations is almost always inappropriate; attempts to proselytise or to claim one or other religion as somehow better than another is unprofessional and should never take place. Doing so puts often vulnerable patients into the uncomfortable position of feeling the need to take account of their doctor's beliefs. Some patients may feel unable or unwilling to contradict the doctor because of the power imbalance between doctor and patient. Should a patient raise religious matters during a consultation, the doctor must not take this as an opportunity to evangelise, but if appropriate may explore the patient's own ideas and concerns.

"The allegation made by Dr Scott that the GMC has specifically targeted Christianity is perverse. The GMC and many members of the public have been given great cause for concern by the unfounded claims that Dr Scott has made to this patient, and has admitted he has made to thousands more. We would fully expect the GMC to take similar action against doctors of all faiths or none who behaved in a similarly inappropriate fashion and who risked undermining the confidence of the public in the professionalism of medical practitioners.

"We also oppose publicly-funded NHS General Practices being labelled as being of any religion or belief. Labelling General Practices as being of any one belief system risks giving patients the impression that only such patients will be welcomed, and that other patients are, at best, tolerated. This puts unacceptable pressure on some patients to decide whether to actively opt out of spiritual care, as they are invited to do in Dr Scott's practice, or go along with the religious element for fear of alienation. Forcing such a dilemma on patients undermines the doctor-patient relationship – a relationship based primarily on trust. Particularly where there is a limited choice of GPs, this compromises patients' entitlement to publicly-funded medical treatment."

Keith Porteous Wood of the National Secular Society, added: "We are also concerned at the description of the Bethesda Medical Practice in Margate, where Dr Scott works, being described as "expressly Christian". This is a practice set up for the use of the whole community using public money; it cannot be hijacked by any particular religion and used — as in this case — for evangelical purposes. All aspects of the National Health Service, whether hospitals or GP practices, must be equally open to all members of the community, regardless of their faith. Nobody should feel that they are not welcome because the practice has put a religious label on itself.

"The NSS will consider making a complaint to the local health authority about this."