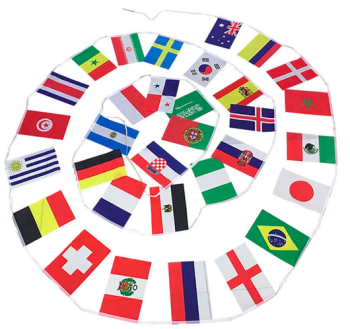 The brewer Greene King has taken the Saudi Arabian flag down from its World Cup displays after complaints from some Muslims that an Islamic symbol shouldn't be in a place which serves alcohol. Chris Sloggett responds.

Do you find the Saudi Arabian flag offensive? Why? Because it represents a country where people can be executed for being gay? Because freethinking Saudi bloggers such as Raif Badawi can be locked up and flogged for speaking their minds? Because Saudi women need male guardians to make decisions on their behalf? Because of Saudi conduct in Yemen? Because Saudi Arabia has exported fundamentalist Islamic preaching around the world?

None of these are good enough reasons to stop pubs from putting the flag up in their displays during the World Cup. And perhaps rightly so. Pub owners don't really think about these things at this time of the four-year cycle. If they did, perhaps they wouldn't show this World Cup at all, given the tacit endorsement it gives to Vladimir Putin's Russia.

That's because their flag displays aren't intended to make a political statement. They're a reflection of the universalist ideals which, at least theoretically, lie behind this international football tournament. Part of the implicit message they send is that the World Cup is an event for people from all corners of the globe. When we watch a game we can all forget about the litany of depressing news that fills our screens and be a bit tribalistic about something that doesn't actually matter.

England fans can argue the toss over who should start the game against Tunisia. Scots can cheer on Whoever's Playing England. Non-football fans can take a sudden interest in Costa Rica after drawing them in the office sweepstake, or take part in the ritual moan about the fact there is too much bloody football on TV.

But back to all that depressing news. Apparently there's a better reason to be offended by the Saudi flag than any of those listed above. Better, because this one is apparently a good enough reason for the flag to be taken down.

This week the Greene King brewery – which owns more than 3,100 pubs in England, Wales and Scotland – said it had decided to remove the flag from its World Cup displays. Apparently "some customers in London" complained about the sight of the flag in a place where alcohol is sold. Their grounds for complaint were that the flag features the shahada, an Islamic declaration of faith. (The flag features the shahada, by the way, because Saudi Arabia is an Islamic theocracy. Perhaps we should add that to the list of reasons to be offended by it. If you want more control over where the shahada goes on display, perhaps your complaint should be directed at the fact there's a religious incantation on the flag which a national team is playing under.)

"We understand it was inappropriate," the brewery said as it justified the removal – showing that it did not, in fact, understand the issue that mattered. Nobody has ownership over, or the right to veto the use of, a set of symbols. The brewery should have felt able to tell the complainants to go elsewhere if they didn't like it. It might also have pointed out that their logic hardly seemed to reflect warm feelings towards those who frequent their local pubs anyway.

Greene King's decision follows a similar one from the German brewery Eichbaum, which withdrew a marketing campaign featuring the World Cup participants' flags on beer bottle caps last month. The brewery stopped producing the line of bottle caps and started removing the Saudi bottles from shops after social media users complained about the Saudi logo.

If you haven't heard about these stories, that's because we've normalised this. If you do a quick Google search for 'Eichbaum Saudi flag' you'll see headlines talking about the people on social media who had their feelings hurt; you'll struggle much harder to find those worrying about the implications of giving in to them.

Alternatively take a look at the press coverage of this week's Greene King episode. You may find the reports from the likes of the BBC or iNews which explained what had happened and recited the brewery's position but made no mention of anyone who disagreed with it. Or you may find worse.

The Independent's report seemed based on the premise that the Saudi Arabian embassy's view – on both the Greene King and Eichbaum episodes – was worthy of coverage, while the views of those who disagreed with it were not. Perhaps the Saudi embassy's opinions are more worthy of attention than those of their critics'? Perhaps Raif Badawi's wife couldn't be reached for comment?

Yesterday London's Evening Standard dropped a reference casually in to one paragraph of a World Cup-related comment piece in its middle pages. The author wrote that the decision had come "after complaints from Muslims who — perhaps justifiably — are uncomfortable with having the shahada… plastered all over a place you go to get plastered".

It shouldn't be normal to turn to page 17 and read "Blah blah blah, football, blah blah blah, World Cup, oh by the way thousands of Britain's much-loved watering holes have been instructed to conform to (perhaps justifiable) demands for totalitarian blasphemy codes, now back to the football". But it is because we do not see things this way.

Instead we look at each episode – whether a major one like those involving Salman Rushdie, the Danish cartoons or Charlie Hebdo, or a relatively minor one like this or the Louis Smith debacle – and say: it's just a novel. It's just a cartoon. It's just a gymnast. It's just a flag.

But it never is just these things. It's also the many other things that don't get said, and the countless things that get said a little differently.

It's not just the things that we think might offend Muslims (although Islam – at least for now – places uniquely demanding restrictions on free expression). It's the episodes where other religious groups learn the lessons of each of these miserable surrenders. It's the energy wasted over loud complaints from hardline Christians over Greggs displaying a sausage roll in the nativity scene. In some cases it's the shutting down of speech because it's seen as too complimentary to Muslims, such as when Hindu fundamentalists launched a violent campaign against the Bollywood film Padmavati. It's the emboldening of intolerant censors of any faith or indeed of none.

It's the infantilisation of Muslims and the assumption both that they cannot be expected to deal with something they find offensive and that they all think alike. It's the blurring of the distinction between bigotry and standing up for the most fundamental principle on which a free society is based. It's the phenomenon which gives anti-Muslim bigots the legitimate grievances they crave.

Enjoy the World Cup. It shouldn't be normal for pubs to conform to blasphemy codes.