The demonisation of Louis Smith: This is how a de facto blasphemy law works 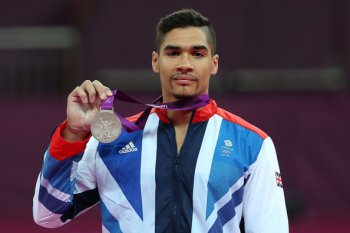 The castigation of a British gymnast for 'mocking Islam' is illustrative of a troubling return of blasphemy, argues Stephen Evans.

If you've been following the hounding of British Olympic gymnast Louis Smith this week, you'd be forgiven for forgetting that blasphemy laws were abolished in England back in 2008.

The very public castigation of the British gymnast is illustrative of the troubling return of blasphemy. As the former Strictly Come Dancing winner has discovered – and to his immense cost – Britain's bourgeoning 'culture of offence' is ensuring that any action deemed likely to offend religious sensibilities, but particularly Muslim sensibilities, is strictly taboo.

The 'offending' footage, published by The Sun shows him with fellow gymnast Luke Carson drunkenly goofing around yelling "Allahu Akbar" and mocking aspects of Islamic belief.

Condemnation came swiftly from Mohammed Shafiq, the chief executive of the Ramadan Foundation, who asserted "our faith is not to be mocked" and called on Smith to "apologise immediately".

Or else what? One wonders. Because Mohammed Shafiq has form when it comes to whipping up hostility against people lawfully exercising their right to free expression. Back in 2014 when Maajid Nawaz tweeted a Jesus & Mo cartoon with a message saying he wasn't offended by the depiction of Mohammad, Shafiq threatened to "notify all Muslim organisations in the UK of his despicable behaviour and also notify Islamic countries."

Following Shafiq's lead, other condemnation soon followed. A Muslim councillor in Peterborough withdrew his support for the four-time Olympic medallist to receive the Freedom of the City. Sponsors distanced themselves from the athlete. British Gymnastics, the official governing body for the sport, threatened Smith with expulsion. "British Gymnastics does not condone the mocking of any faith or religion", said a spokesperson.

For his part, Smith issued a swift apology and a statement in which he recognised the "severity" of his mistake.

And for those accused of mocking or insulting Islam, there are indeed "severe" consequences.

Just ask Asia Bibi, the Christian woman currently facing execution in Pakistan for blasphemy. Or Raif Badawi, who, after receiving 50 lashes outside a Jeddah mosque in January for "insulting Islam" is still languishing in a Saudi prison.

There are others you could ask, apart from the fact that they're dead. Take for example Asad Shah, the Ahmadiyya Muslim shopkeeper from Glasgow who was stabbed to death in March by a Sunni Muslim for "disrespecting Islam". Or the polytechnic student recently lynched and beaten to a pulp by an angry mob in Nigeria over an allegation of blasphemy. Or of course those killed in the attack on the French satirical newspaper Charlie Hebdo. I could go on and on and on listing the countless names of people murdered for the 'crime' of "disrespecting Islam".

Britain has a pedigree to be proud of when it comes to poking fun at religion. It certainly makes Britain a better place to live than some other states where religion demands complete 'respect'. Would those insisting that religion must not to be mocked do away with British comedy classics like Monty Python's Life of Brian and Father Ted?

I accept that Louis Smith's drunken foolery wasn't exactly 'comedy gold', but that's beside the point. There's much more at stake than our ability to laugh at religion.

For Christopher Hitchens, mockery of religion wasn't just acceptable, it was essential. "One of the beginnings of human emancipation is the ability to laugh at authority", he observed.

A similar view was articulated in the Council of Europe's 2016 Resolution on 'freedom of expression and respect for religious beliefs', which stated:

"There cannot be a democratic society without the fundamental right to freedom of expression. The progress of society and the development of every individual depend on the possibility of receiving and imparting information and ideas. This freedom is not only applicable to expressions that are favourably received or regarded as inoffensive but also to those that may shock, offend or disturb the state or any sector of the population".

Britain's tendency to tread carefully around Islam can be traced back to the Rushdie Affair in 1988, which saw angry and frequently violent reaction from Muslims to the publication of Salman Rushdie's novel The Satanic Verses. Iran's Ayatollah Khomeini accused Rushdie of blasphemy and issued a fatwa ordering Muslims to kill him. Since then we've seen the emergence of a de facto blasphemy law, enforced by the ever-present threat of violence.

Then there's the often employed and effective weapon of the 'islamophobia' accusation, which seeks to equate criticism of Islam with racism, often with disastrous consequences for those being accused.

Like many people, Muslims included, I long to see a more modern, human rights compliant version of Islam take hold. One that embraces Enlightenment secular values, such as freedom of speech, gender equality, the separation of religion and state, and so on.

Muslims are hardly likely to realise this ambition if the rest of us mindlessly pander to the lunatic fringe of Muslim society which insists that Islam must never, under any circumstances, be defamed. Wrapping Islam in a protective blanket and insulating it from criticism and ridicule will do nothing to help it mature, as other religions have done.

However well-intentioned, over-reactions like those we've seen this week to Louis Smith's mockery of religion have a disastrously chilling effect on free speech. It plays into the hands of the Islamic world's professional offence takers who would like nothing more than to see all criticism of Islam silenced once and for all.

Being offended from time to time is the price we all pay for living in a free country. If religion expects to be tolerated it needs to be tolerant and robust enough to withstand mockery. Let's insist on respect for people's rights, but not their beliefs. Bigotry and hatred need to be called out, but there should be no shame in mocking religion. So let's be assertive in defending our liberal values and in doing so cut Louis Smith some slack.