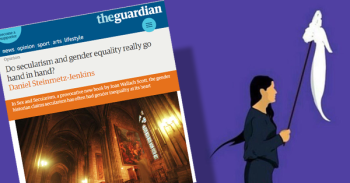 Western academics who claim that secularism undermines women's rights are not merely wrong; their assertions are a slap in the face of women fighting for their rights under religious tyranny, says Megan Manson.

Of all the images that have emerged from mass demonstrations against Iran's theocratic regime, perhaps none is so iconic as the footage of a young woman waving a veil on a stick.

We do not yet know her name. All we do know is that, in the middle of a crowded street in Tehran last Wednesday, she stripped off her hijab and stood on a makeshift platform to speak out for women's rights. For this act of self-expression and defiance of Iran's "modesty" laws, the woman has been arrested.

Her arrest is but one of hundreds that have taken place in Tehran over the past few days. The protestors know exactly what kind of a risk they're taking in speaking out. In 2009, 30 were killed and thousands arrested during demonstrations following the presidential election. Already, these most recent protests have claimed the lives of more than 20 people. But the people are willing to risk life, limb and liberty to fight back against the Islamist government that denies their rights.

Women have been among the most oppressed groups in Iran – and the bravest. Ever since the establishment of the Islamic Republic in 1979 forced women to don headscarves and loose-fitting conservative clothing in public, Iran's women have not ceased in their resistance. In the same year, more than 100,000 Iranian women went on strike took to the streets in protest on March 8th – International Women's Day. Although the Iranian government has announced that women who do not wear the hijab in public will not be arrested, campaigners know that true freedom for women to wear what they like is still far away; women who are caught not wearing hijab will be forced to attend mandatory 'Islam educational classes'.

The stifling, sexist, compulsory hijab is a perfect symbol of Iran's religious tyranny. And the women who tear their hijab off are perfect symbols of the people's rejection of this tyranny. The message couldn't be clearer.

So why are there those in the Western media and academia who, instead of joining forces with these women to fight for freedoms they themselves enjoy, seem to be doing all they can to undermine their efforts?

Just days after the veil-waving protestor was arrested, The Guardian published an opinion piece entitled: "Do secularism and gender equality really go hand in hand?" The piece is a review of a new book by 'gender historian' Joan Wallach Scott, entitled Sex and Secularism. This book challenges the "long-held assumption is that gender equality is an enduring principle of secularism," as reviewer Daniel Steinmetz-Jenkins puts it. Scott's position is explicit: "The notion that equality between the sexes is inherent to the logic of secularism is false," she argues, taking issue with secularist campaigners "who smugly claim that it is inherently good for women".

Never mind that a pivotal figure in the history of secularism, women's rights campaigner Annie Besant, was prosecuted along with National Secular Society founder Charles Bradlaugh in 1877 for publishing a book on birth control. Or that secularists were among those jailed for supporting the suffragette cause in the 1900s. Or that secularists continue to be some of the staunchest defenders of women's rights from religious privilege, including their rights to control their own reproduction, to receive sex education free from religious censorship, to be fully protected under UK law rather than religious rulings, and to be spared from the barbaric cruelty of female genital mutilation.

No, this history is apparently swept under the carpet. In Scott's view, secularism fails women because of "its inability to imagine gender equality and religious freedom outside the confines of secularism" and that Muslim women in the West are oppressed because they do not "buy into our neoliberal ways of life". It is telling that Sex and Secularism is acclaimed by Judith Butler, who has described Hamas and Hezbollah as "progressive", and Joseph Massad, who views the promotion of liberal values such as feminism and LGBT rights as some sort of "proselytisation and conversion" conspiracy against Muslims.

To his credit, Steinmetz-Jenkins points out that Scott skips over historical ties of feminism with secularism, and that she "does not explain why today, self-identified religious communities are more supportive of legal inequality than secular ones". But his criticism of this book's "oversight", as he calls it, is lightweight. For the most part, his review is positive, lauding Scott for her "excellent observations" and saying that the book "must be praised for drawing attention to the history of secularism and gender inequality". He also asserts that "Scott's message is no doubt timely in light of the powerful effect of the #MeToo campaign, which should given [sic] anyone pause before boasting about the superior treatment of women in the secular west".

That Steinmetz-Jenkins equates the systemic deprivation of women's most basic rights under the name of religion with the #MeToo movement (which noticeably sidelined religiously-sanctioned abuse of women) is alarming. This, together with the acceptance of the idea that perhaps secularism really is anti-women, points to two deeply troubling issues in academic discourse regarding religion and state.

The first is that many academics and commentators seem so out of touch with reality that they fail to see the wood for the trees. If you honestly believe that it's a good idea to suggest that secularism is guilty of promoting gender inequality at the same time a woman in Iran gets arrested for removing her hijab, one has to wonder what planet you're on. Only someone privileged to be living in the luxury of a liberal democracy, far away from the brutality of theocratic tyranny, could possibly make such a tone-deaf and ill-timed statement. To suggest that fighting for secularism is to fight against feminism is a slap in the face of the Iranian activists.

The second, more sinister, issue is that such commentators are embracing a kind of Orwellian double-think, in which black is white, up is down, left is right. Perhaps it is mere fashionable contrarianism, an attempt to be edgy and provocative in order to appear forward-thinking. But if we start taking this kind of double-think seriously, one wonders how long it will be before society embraces the mantra: "War is peace, freedom is slavery, ignorance is strength, secularism is sexist".

Yasmin Rehman was among campaigners who recently met Ofsted's chief inspector to discuss veiling in schools. Now, she writes, some powerful Muslims are making sinister efforts to silence her and her fellow...