The human rights of women and secularism go hand in hand 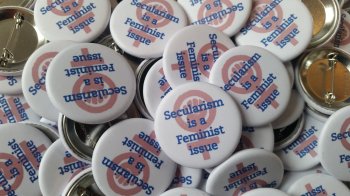 On International Women's Day 2017 NSS campaigns officer Alastair Lichten reflects on the intersection of gender and religious privilege, and what the secularist movement can learn from IWD.

The theocratic mindset has always had a particular obsession with policing women's bodies and religion has often been used as a tool of patriarchy. When religious feminists have challenged the patriarchy within their religion, they have similarly been challenging the religious privilege of male leaders.

Too often male religious leaders are treated as representatives of their 'groups', while women's rights are sacrificed to religious concerns. Too often religious privilege supports attacks on women's reproductive rights and transwomen's identity. Religious privilege has allowed the terrible crime of FGM to go unpunished and has seen gender segregation normalised in universities and even schools.

It was religious privilege that saw the National Secular Society's founder Charles Bradlaugh and vice-president Annie Besant and prosecuted for making information about birth-control available to working class women. Religious privilege has been used to block and to shame women fleeing forced marriages, to block reforms making marriage more equitable, and to block Trans and non-heterosexual women from it entirely.

Religious privilege allows narratives of 'modesty' – underpinned by coercion and shame – to control women's clothing choices. While those who criticise such 'modest' clothing as the burka from an anti-Muslim position get the lion's share of attention, feminist critiques and women's rights advocates are often sidelined.

As many of the events of IWD show, challenging sexism needs to involve both men and women – while still preserving a space for women's specific experiences – both benefit from equality.

Similarly – without silencing critiques of religion or alienating its support among atheists – the secularist movement can do more to involve religious voices, including those on the front line of challenging theocracy.

Secularism can respect the cultural and lived experience of religious people, while campaigning against religious privilege and patriarchy. A point made so effectively by UN Special Rapporteur for Cultural Rights Karima Bennoune, in her acclaimed book Your Fatwa Does Not Apply Here: Untold Stories from the Fight Against Muslim Fundamentalism. While over two thirds of Britons support gender equality, only 7% identify as feminist. Similarly, many have sought to make secularism a dirty word, even though it's principles of basic fairness have broad support, including among the religious.

In 2016 both the National Secular Society and the Fawcett Society celebrated their 150th anniversaries – both societies having emerged during the same period of nineteenth century radicalism. Despite all that needs to be done, our movements can look back over the last 150 years with huge pride.

Our movements have shifted the debate and made appeals to fairness the default position. We're all at least feminist-ish now, we're all at least secular-ish and privilege now feels the need to at least try and disguise itself.

The secularist movement is still too dominated by male voices, while the contributions of female secular activists, particularly women of colour are often overlooked.

There are things we can do to change this, from giving platform to and speaking out on religious privilege issues affecting women to celebrating the work of female secularists.

This is something we've always sought to do through our Secularist of the Year awards – just over half of which have gone to women. Women like Safak Pavey and Sophie in 't Veld for their international work promoting secularism. Women like Maryam Namazie and Southall Black Sisters for challenging religious patriarchy and defending free speech.

This year's shortlist includes three inspiring women. Asma Jahangir, the former UN Special Rapporteur on Freedom of Religion, who has campaigned so bravely for secular justice. Houzan Mahmoud who has created innovative spaces for women to challenge theocracy. And Yasmin Rehman, who has campaigned tirelessly for secular approaches to human rights. The awards will be presented by Yasmin Alibhai-Brown, a powerful advocate for women's rights and a fierce critic of sharia law and faith schools.

International Women's Day is a reminder that a secular approach to policy making is vital for the implementation of the human rights of women. Secularism and gender equality very much go hand in hand.