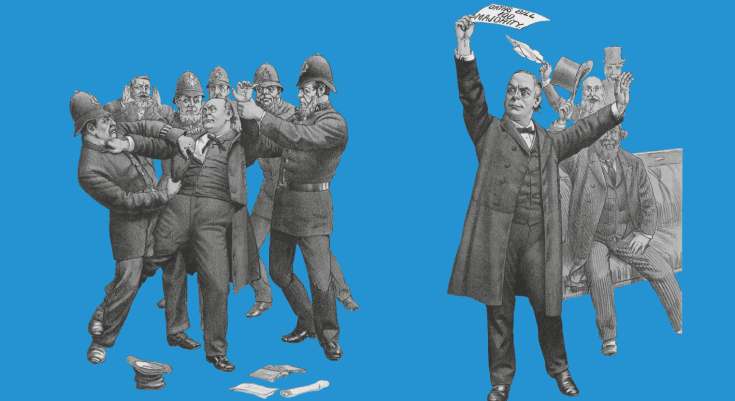 Our story began in 1866 when a large number of secularist groups from around the UK came together to strengthen their campaigns. Their leader was Charles Bradlaugh. Since those early days the National Secular Society has pioneered many important social reforms and society has changed a lot.

For centuries, religion-based laws forbade entry for non-believers into parliament. They banned abortion, divorce, contraception, homosexuality, blasphemy and even cremation. Those laws have now been dismantled; human rights and equality for minorities are broadly accepted and protected by law.

In the struggles to bring about these reforms, the NSS has always played a prominent role and sometimes a decisive one.

To mark our 150th anniversary in 2016 the National Secular Society commissioned a portrait bust of Charles Bradlaugh which is now on display in the Palace of Westminster as part of the Parliamentary Art Collection. We also produced an anniversary brochure giving a potted history of our first 150 years.

Read on to find out more about our story, and some of the significant historical events and people that illustrate the NSS's rich history.

Secularism before the NSS

Throughout history, different religious and political traditions have considered the relationship between individuals' personal conscience and ideology, between the divine and the secular. What today we might call the balance of freedom of and from religion.

During the 18th century, the Enlightenment movement, revolutions and the emergence of the nation state, all challenged the relationship between church and state. Secularist philosophers religious and non-religious alike, created the intellectual climate in which the National Secular Society was to emerge.

Inspiration came from early freethinkers. The most important of these was Thomas Paine, whose pioneering Rights of Man changed the way ordinary people thought about politics and their place in society. Also of importance was Richard Carlile, who went to jail for nine years for publishing Paine's The Age of Reason, a trenchant critique of the Bible. Later leading figures included Robert Owen, George Jacob Holyoake — who first coined the word 'secularism' — and our first President, Charles Bradlaugh. These freethinkers often stood at the forefront of radical and reformist movements, which gained strength in the 19th century.

British secularism was essentially a working-class movement strongly influenced by the French revolution. In the mid Nineteenth Century the secularist movement was widespread, with many local society's being founded. However the radical and freethought leadership was fragmented and, in Bradlaugh's opinion, insufficiently positive.

Momentum for constitutional disestablishment – at least in England – declined in the twentieth century. While social changes undermined religious privilege, religious organisations played an increasing role in the expanding state.

The Society's third president - Chapmen Cohen introduced a new generation to the secular cause. By the end of WWII life in Britain had become increasingly secularised, but there was still a pressing need for existing religious privileges to be challenged. Playwright Harold Pinter wrote in the 1966 NSS centenary brochure:

"The fact remains that children are still indoctrinated in schools at public expense…and many humane and rational reforms remain opposed…The work of the National Secular Society remains highly important".

These words remain as true today as when they were written; in some ways they are even truer. For example, the role of religion in state education has probably grown rather than declined.

David Tribe and Barbara Smoker were notable Presidents in the second half of the twentieth century. They greatly increased the society's use of the media to express its views.

The 21st century has seen a drastic decline in religious observance in the UK. At the same time there has been a rise of religious diversity and increasingly personalised religion, where religious leaders' and institutions' hold over public opinion – even among the religious – has vastly diminished. Despite this era of secularisation, religion has remained politically influential and privileged. Religious fundamentalism has remerged as a political force. Global conflicts between capitalism and communism have been replaced in places with a conflict between secular democracy and theocracy.

New, often contentious, model of both secularism and religious privilege have emerged. And secularism is increasingly being seen as a human rights issue in which people of all faiths as well as none have a stake.

Free online encyclopedia with resources on the history of secularism.

Spartacus Educational is an external website with essays and other educational material on a wide variety of historical subjects. The NSS does not necessarily endorse its resources. However we have told us that it has a number of useful resources on radical historical figures. If you have enjoyed our historical resources you may find the following Spartacus articles useful:

We've achieved some remarkable victories over the last 150 years, and our society has become fairer, more equal and more secular. But there are still huge challenges ahead. Will you help us continue our work?