Some good news for free speech on campuses 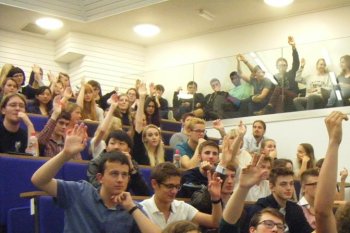 With too many instances of campus censorship to list, it's easy to be pessimistic about freedom of expression on campus, but there are a few promising signs of progress, led by students, writes Benjamin Jones.

I've spoken on two university campuses in the past two weeks, Bath University, and before that at my own alma mater Exeter, and on both occasions there have been causes for optimism about freedom of speech.

The topic at Bath was on blasphemy, free speech and censorship on campuses, a subject sadly too vast to adequately address in 45 minutes, and at Exeter I spoke alongside Bob Churchill of the International Humanist and Ethical Union (IHEU) opposing the motion "this house would not satirise religious figures".

We won the debate with a convincing majority, despite the wording of the motion allowing audience members to reason "one should be free to satirise, but I don't wish to." Had the motion been "this house would ban criticism of religious figures" I hope we might have won even more convincingly, but the Debating Society which hosted it may have had trouble finding speakers willing to put their name to such a coercive motion.

Nevertheless, the sight of so many students raising their hands at the end of the debate to vote for and support the free speech argument was very welcome.

We were speaking against two academics, one of whom had published a book about the Satanic Verses 'controversy' (which should really be called the 'fatwa controversy') ominously titled "Be Careful With Muhammad".

Coincidentally, that slogan appeared on the banners of the Muslim Action Forum marching in London earlier this year, and (not having read his book) I argued that the slogan on the banner seemed to me the first clause of a threat, completed by the words "or else".

The audience seemed most persuaded by the propositions' arguments when they were framed around protecting the dignity of Muslim individuals, by refraining from criticising or satirising Islam. In this way identity politics reared its head, and we had to deal with well-meaning objections from some in the audience who unwittingly propounded arguments for censorship in the language of "respect" and "tolerance"; virtues in themselves to be sure, but meaningless in an unfree society.

The proposition used the example of a poor Muslim taxi driver in Bradford (I paraphrase) whose "main dignity was derived from Islamic identity." They argued that to "take this away from him" by satirising Mohammed was unjust.

In response to these types of points I argued that all sorts of identity markers and ethical beliefs are intrinsic to my identity, but that criticism of these things did not deprive me of anything, and that it was – and is – a patronising argument to assume that, because somebody is poor, and Muslim, that their ideas cannot be open to challenge in the normal way; not least when the challenge is not lodged at them personally, but impersonally in newspapers, debates, discussions and in wider society. An atheist might well refrain from telling an individual religious believer that their faith was a false consolation (a self-censorship not practised by the many Christian preachers the NSS speaks out to defend when they get into trouble with the law for what they have said) but that should hardly mean that they ought never to express those views under any circumstances.

At Bath the NSS was invited to speak by the Atheists, Humanists and Secularists Society, and I was mildly surprised when I asked the small audience if anybody present supported a no-platform policy. There seemed to be no support for this whatsoever, and an apparent consensus that often the most effective way to challenge extremism was to defend the right of ignorant and mendacious fanatics of all kinds to embarrass themselves and their causes in front of large, confident, educated audiences.

The Bath AHS and the University of Exeter Debating Society are self-selecting groups, with an obvious predisposition to defending free speech by their very nature. But they and groups like them are the nucleus of a small, though important, student push-back against campus censorship.

Who is more representative of ordinary students, the members of these two groups, or the busybodies in obscure positions of the NUS hierarchy who want to 'no-platform' a prodigious and manifestly absurd variety of speakers, while resisting the Prevent strategy, without a modicum of self-awareness, because they say it restricts free speech? I think (and hope) that the answer leans towards the former, and that they might begin to make their voices heard more loudly.

Outside the university 'bubble', wider society is ever more aware and scornful of Student Union censors; while within higher education some students are starting to speak out with more confidence.

Undoubtedly there will be other examples of de facto bans on blasphemy this academic year, and very many bad speaker policies remain, but universities and students are not wholly lost.

With pressure from outside, and (I hope) growing opposition from their members, Student Unions themselves will learn too that free expression must be safeguarded – while institutions see the reputational costs of censorship and consider how to fulfil their legal and moral duty to defend freedom of speech.

Whether or not the students at these two events were a fair sample of their peers, it was reassuring to see so many students emphatically standing up for freedom of expression: There is some cause for hope.