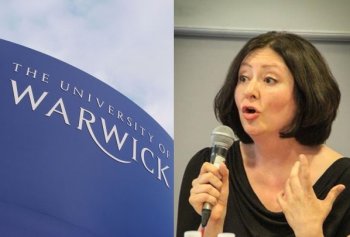 Ms Namazie had been blocked from speaking at a Warwick Atheist, Secularist and Humanist Society event after the Student Union said the ex-Muslim campaigner could 'insult' religion. The SU were also concerned that Namazie, an NSS honorary associate who campaigns for human rights and equality, could 'incite hatred'.

Informing Ms Namazie of their initial decision to block her, the SU wrote: "There a number of articles written both by the speaker and by others about the speaker that indicate that she is highly inflammatory, and could incite hatred on campus. This is in contravention of our external speaker policy".

The National Secular Society reported the story immediately and publicly called on the Union to reverse its decision. After receiving extensive criticism in the national press and on social media, the Student Union finally relented.

In a frank apology on their website, the SU admitted they had "failed, and failed badly in this case" and promised to "act immediately to examine how that happened, and to it put it right".

NSS executive director Keith Porteous Wood commented: "We welcome the Student Union's change of heart and hope their 'continued commitment to free speech' is reflected in actions as well as words. Freedom of expression is under growing threat, particularly when it involves discussions surrounding Islam. Every act of appeasement to those intent on closing down debate encourages self-censorship and depletes this freedom further.

"Freedom of expression is not only a pre-requisite for resolving challenging problems but for the functioning of democracy itself.

"The Student Union's decision has saved it and the University from an escalation of this unfortunate situation and potentially even a legal challenge further down the line.

"While this case has ended in the right outcome, we still have grave concerns about an external speaker policy which says guests on campus must 'avoid insulting other faiths'. This is extremely broad and open to a wide variety of interpretations, and therefore extremely restrictive to freedom of speech.

"Universities have a legal duty to defend freedom of expression and in our view certain Student Union policies may be working in direct conflict with that duty. This is an issue we hope to discuss with the NUS in the coming weeks."