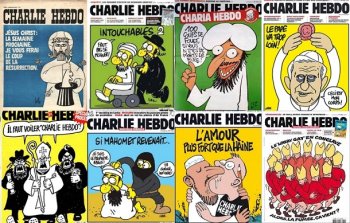 If there was ever a time when the British print and media press should have shown courage and strength and published the Charlie Hebdo cartoons, it was immediately after the attacks on the 7th January 15. Instead not one single British newspaper or TV news channel has chosen to do so. It is a monumentally cowardly response which shows the attackers have won.

Instead all we had was the usual "debates" condemning only the act itself although not necessarily defending the right to free expression-(see the Newsnight debate with Iqbal Sacranie who suggested the prophet of Islam shouldn't be mocked because he was like a member of his family). We had debates about alienation and foreign policy and the things the French state had done to cause grievances amongst Muslims, thereby implicitly providing justification for the attacker's grievances, if not for the act itself, or obfuscation at a time when it is not necessary. The best that the Independent could do on its front page is essentially stoop to a playground insult. I'm sure the attackers are quaking in their boots.

We should be clear, this attack was not about the niqab ban in France or about alienation or Foreign policy. Charlie Hebdo was specifically targeted because it had exercised its right to free expression and published cartoons depicting the prophet of Islam, which is considered blasphemous and therefore offensive to Muslims. The attackers felt so offended by the cartoons that they believed the only answer was death for the offenders. This was the sole cause of the murders.

To suggest that it has nothing to do with Islam or that the attackers did not find any justification from within Islam for their actions is false because as we know many Muslim majority states criminalise blasphemy with the death Penalty as punishment- Pakistan for example. Many other Muslims hold a different view and have been lining up to condemn both the act and also support the right to free expression; what they don't need is for the press media desert them at this hour and bow down to the enemies of free expression.

There are some glimmers of hope. Last night Newsnight finally showed a cartoon depicting Mohammed and the BBC it seems might be revising its guidance which specifically stated that they should not depict images of Mohammed.

I wish I had paid more attention to the Charlie Hebdo cartoons. Looking through them now, they seem very funny, harmless, intelligent, witty and superbly irreverent. Sadly we might never see the like again since few (not even today when they could have done it without mush criticism) have been brave enough to do what they did, which is to publish the cartoons.