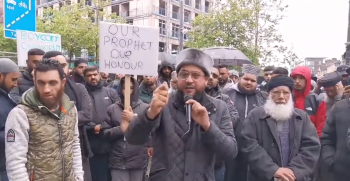 Cineworld has confirmed it has cancelled nationwide screenings of "The Lady of Heaven" after Muslims protested outside cinemas across the UK.

A spokesperson from Cineworld told the National Secular Society: "Due to recent incidents related to screenings of The Lady of Heaven, we have made the decision to cancel upcoming screenings of the film nationwide to ensure the safety of our staff and customers."

Vue Cinema is also understood to have cancelled showings of the film.

But some Muslims consider the depictions of Muhammad and other Islamic figures in the film 'blasphemous'.

In footage of one protest posted on Twitter, the manager of a cinema in Sheffield is seen telling a large, loudly chanting all-male crowd that the cinema "will not be showing this film again".

He adds: "We totally agree with what you're saying".

Some Islamist extremists in the UK have issued death threats over depictions of Muhammad. Last year a school teacher was forced into hiding over fears he might be murdered after showing a cartoon of Muhammad during a religious education lesson.

The incident followed the murder of French school teacher Samuel Paty in 2020 who also showed a Muhammad cartoon at his school.

Executive producer of the film Malik Shlibak said: "We think that the protests have brought a lot of new found attention to the film that did not exist before from people who hadn't heard about the film, and we are okay with the fact that people protest.

"But I believe it's actually unacceptable in this country what they are calling for - that is the removal from this film from the cinemas due to them being offended.

He added: "I think this is more than The Lady of Heaven as an individual film, this is about our British values and how much these mean to us.

"These groups have now been given the power to dictate what the British public can and cannot watch at their local cinemas."

The National Secular Society, which campaigns to protect freedom of speech, expressed concerns over the cancellations.

NSS chief executive Stephen Evans said: "It's alarming that cinemas feel forced to cancel this film to protect the safety of their staff and customers.

"They are essentially being coerced into obeying religious blasphemy codes. Their concerns are understandable, considering previous threats and attacks by Islamist extremists on people who show depictions of Muhammad.

"But acquiescing to these demands will simply embolden religious extremists to continue intimidating businesses that showcase artistic works they don't agree with.

"Cinemas must be assured by the authorities that their right to show films, even those deemed offensive by religious fundamentalists, will be protected and upheld."

Image: Still from footage of one of the protests