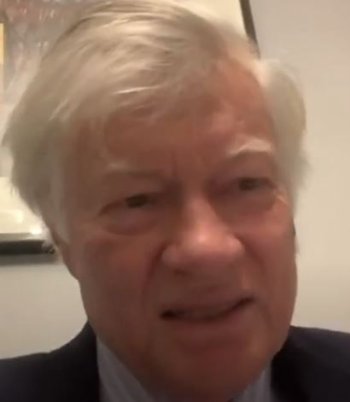 Leading human rights barrister Geoffrey Robertson has called for the disestablishment of the Church of England in the National Secular Society's 2020 Bradlaugh Lecture.

During the lecture, The ultimate blasphemy: disestablishing the Church of England, he argued for the separation of formal ties between church and state.

He called for the end of the lords spiritual – the 26 places automatically reserved for C of E bishops in the House of Lords.

He questioned the monarch's role as head of the church, arguing that the C of E's establishment will seem particularly "antediluvian" during the next coronation.

He also noted that:

He also paid tribute to Charles Bradlaugh, the NSS's founder whose name is behind the lecture, describing him as a "courageous freethinker" who had "made life easier for all of us".

History of the C of E's establishment

Part of the lecture also explored the history of the C of E's founding and establishment. Robertson noted the role played by "the lust of a pathological monster", as Henry VIII broke with Rome so he could marry Anne Boleyn.

He also noted that the blasphemy law which protected the established religion was used to silence criticism of Anglicanism and undermine gay liberation efforts. He addressed challenges it faced in the 19th and 20th centuries – including cases which he was personally involved in.

The blasphemy law was abolished in England and Wales in 2008.

NSS chief executive Stephen Evans thanked Geoffrey Robertson for his lecture, describing it as "a colourful, comprehensive and engaging journey through religious privilege" which had "persuasively" made the case for disestablishment.

After the lecture, Robertson said: "The National Secular Society stands for sanity and reason against the power of superstition and theocracy.

"Although it has existed, thanks to Charles Bradlaugh, for over 150 years, there is no time at which it has been more necessary than now."

History of the Bradlaugh Lecture

The NSS launched the Bradlaugh Lecture on the 151st anniversary of its foundation. The lecture provides a space for a distinguished speaker to explore a secularist topic in depth.

In previous years the lecture has been held at Manchester Art Gallery in September. It was delayed and moved online this year as a result of the coronavirus outbreak.