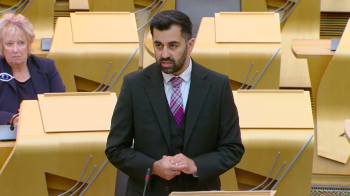 The National Secular Society has welcomed news that Scotland's current hate crime bill will be amended, but warned that offences within the bill remain "a menace to free and open debate".

The bill – which would criminalise 'stirring up hatred' on various grounds, including religion – has faced widespread criticism amid concerns that it would undermine freedom of expression.

In parliament today, the justice secretary Humza Yousaf (pictured) said the Scottish government would bring forward amendments to the bill. These would mean the prosecution would need to demonstrate intent to secure a conviction for 'stirring up hatred'.

He also said he was "open to consider further reforms" to protect freedom of expression, but added that scrapping the stirring up offences within the bill was "not an option".

"We welcome the recognition that prosecution thresholds were too low and a requirement for intent needs to be included.

"However, the stirring up offences remain unnecessary and excessive. They would unacceptably erode freedom of expression and menace free and open debate.

"We share the aspiration of building a more equal and inclusive Scotland. But without far more robust freedom of expression safeguards, this bill will seriously chill free speech."

The bill and relevant NSS campaigning

The unamended bill would have criminalised behaviour deemed to be "threatening or abusive" which was also intended or "likely" to 'stir up hatred'. Yousaf's proposed change will now remove the 'likely' threshold.

In a submission to the Scottish parliament's justice committee in July the NSS said any new offences should only cover threatening conduct, and it should be necessary for the prosecution to prove criminal intent.

It added that provisions in the bill designed to protect freedom of expression are substantially weaker than a much more robust equivalent in similar legislation in England and Wales.

And it noted that existing legislation already protects individuals from threatening and abusive behaviour likely to cause "fear or alarm".

The NSS is also a supporter of Free to Disagree, a campaign which is urging a rethink of the bill.

The justice committee recently said it had received an "unprecedented" response to a consultation on the bill, amid a backlash from police representatives, legal experts, opposition politicians, press freedom advocates and others.

Responding to Yousaf's statement, the shadow justice secretary Liam Kerr said the changes "do not begin to go far enough".