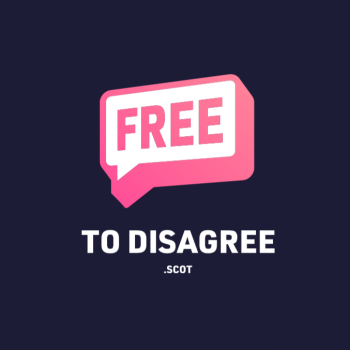 The National Secular Society has joined Christian campaigners and others in launching a campaign which calls for a rethink of plans to criminalise 'stirring up hatred' in Scotland.

The NSS and the Christian Institute are among the supporters of the 'Free to Disagree' campaign, which argues that a Scottish government bill on hate crime must be amended.

The campaign is warning against provisions which would criminalise behaviour which is "threatening or abusive" and intended or "likely" to stir up hatred on various grounds, including religion.

What the campaign is calling for

Free to Disagree calls for the draft offences to be scrapped or amended to protect freedom of expression and identifies five problems with them:

On its website, the campaign says free speech is "a vital right that should only be limited by the state when it has strong grounds for doing so".

It says freedom of expression "must include the ability for citizens to discuss, criticise, and refute ideas, beliefs and practices in robust terms" and there is "no right not to be offended".

It adds that the 'stirring up hatred' plans would "have a chilling effect on debate".

The campaign is also urging Scots to respond to a government call for views on the proposals, which closes next Friday (24 July).

NSS chief executive Stephen Evans said the society has joined the campaign to "reassert the importance of protecting freedom of expression and open, robust dialogue".

"We hope this alliance will encourage ministers to look again at their ill-conceived proposals on hate crime and amend them accordingly.

"Freedom of expression is such a fundamental right that it's imperative for governments to tread carefully in this area. However well-intentioned, the legislation as drafted is excessive, vague and seriously risks chilling free speech. Freedom to say only what others find acceptable is no freedom at all."

Speaking ahead of the campaign launch Jim Sillars said: "Freedom of thought, articulated by one's speech, is so fundamental to the civic and intellectual life of our nation that any attempt by the government to restrict that freedom has to be robustly opposed."

Jamie Gillies, a spokesman for Free to Disagree, said the government had "rightly identified that hatred and prejudice are wrong" but that "strong laws already exist to punish offences aggravated by prejudice".

"The new offences are vague and subjective. They pose a serious risk to free speech on a range of issues. Passing the bill in its current form would divorce Scotland from its proud free speech heritage and undermine freedoms that were centuries in the making.

"MSPs must hold the government to account and protect free speech."

Simon Calvert of the Christian Institute said: "The best antidote to bad speech is good speech. In the current hyper-sensitive political climate, it is vital that politicians don't add fuel to the fire by legislating badly-drafted speech laws that will cause further division, while doing nothing to help real victims of crime."

Dr Stuart Waiton said: "The more tolerant people become, it seems, the more intolerant our politicians become and the more laws we have to criminalise people for words and even thoughts that are labelled as unacceptable. This proposed hate crime bill is potentially the greatest threat to-date to what should be a free and tolerant society."

Find out more and respond to the plans

You can visit the Free to Disagree website to find out more about the campaign. You can also see how the NSS is responding to the Scottish government's plans, and how you can help, on our own dedicated campaign page.