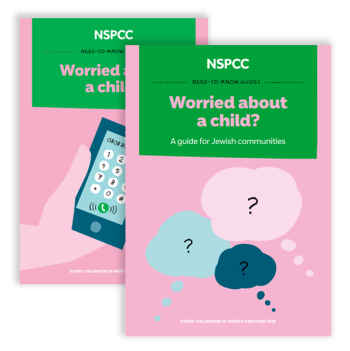 The National Secular Society has challenged guidance from a child abuse charity which withholds and alters information and advice for those raising concerns about abuse within "Jewish communities".

The NSS has written to the NSPCC over its two versions of a document entitled Worried about a child? – a generic one and another specifically designed for "Jewish communities".

The NSS said changes to the Jewish version would undermine the reporting of abuse and exacerbate obstacles recently identified in an official inquiry's report on child sexual abuse in religious institutions.

The Jewish version, which was "informed by members of the Jewish community as well as statutory child protection agencies", encourages children to report concerns to religious authorities along with statutory ones.

It says those with allegations of abuse within "a synagogue, shul, yeshiva, school, centre, youth camp or other organisation" should report them to "the person responsible for safeguarding children in that organisation".

It says the "next steps" taken by those with concerns "may include speaking to your rabbi". Elsewhere it says "your rabbi, family doctor, school nurse, health visitor, or the person responsible for safeguarding in the school may be able to help".

There is no equivalent of any of these lines in the generic version.

Both versions advise those with concerns to "immediately report" what they have been told to the police, children's services or the NSPCC helpline.

NSS chief executive Stephen Evans said encouraging children to approach rabbis and other religious officials would "risk creating a barrier which is likely to hinder the reporting of abuse to the statutory authorities".

The NSS's letter highlighted a recent report from the IICSA inquiry's Truth Project, which found that witnesses were less likely to report child sexual abuse to the statutory authorities when it took place in religious institutions.

The IICSA report said attempts to protect religious institutions and perpetrators meant survivors were "often disbelieved, discredited and not supported".

The report found that child protection training messages had been "altered" in religious institutions to fit the institutions' agenda. The NSS's letter expressed concern that a similar process may have taken place in the creation of the NSPCC's document.

The IICSA report's witnesses were more likely to fear retribution from religious institutions than non-religious ones. The report also found a link between the lack of reporting of abuse and sentiments which religious authorities encourage, such as shame or guilt.

The Jewish version of the NSPCC's guidance also omits and alters information which is included in the generic version.

A section about what to do if a child is worried about a friend has been removed from the Jewish version, with a section entitled "Helping children protect themselves" included in its place.

Some references to the support service ChildLine have been removed from the Jewish version. One reference in the Jewish version says adults could tell children about ChildLine "if you're comfortable" doing so. The equivalent line in the generic version simply tells adults to "give them the contact details" for the service.

The Jewish guidance does not include a list of support groups which were given in the generic version, instead directing complainants towards a list of faith-based organisations which the NSPCC has not endorsed.

The NSS said this ran contrary to the recommendations of the IICSA report, which said "external and specially approved agencies" should deliver training, education and support around child abuse, "particularly for closed minority religious communities".

The NSPCC's Jewish document omits a line saying the definition of neglect includes "leaving a child at home alone for long periods" and a note that "having unexplained presents" could be a sign of sexual abuse. It also does not include a reference to parents who misuse drugs in a section about children who are particularly vulnerable.

In a reference to sexually explicit behaviour which could be an indicator that a child has been sexually abused, the phrase "towards adults" has been added to the Jewish document.

The NSS also raised concerns that the document makes no reference to abuse that is specific to the context of some Jewish community institutions, such as that which takes place in unregistered schools.

Explaining his decision to write the letter, Mr Evans said: "This guidance was no doubt created with the best of intentions. But when it comes to the protection of children all sections of society should be held to the same standards.

"Whilst it may sometimes be legitimate to tailor guidance to specific communities, the advice should not be altered to meet religious demands. Applying such double standards will inevitably create barriers to abuse being disclosed, perpetrators facing justice, and, ultimately, children being kept safe from harm."

The pressure group Mandate Now, which calls for a law requiring the reporting of suspected child abuse to the statutory authorities, said the NSPCC's guidance was a reflection of government failures.

Mandate Now's founder Tom Perry said: "The inconsistency of approach to safeguarding is a structural weakness permitted by the 'bag of bits' which is passed off by government as a safeguarding framework capable of functioning. Instead it fails children and good adults who care for them."

Earlier this year the NSS called on the NSPCC to reconsider its position on non-therapeutic male circumcision after it defended the practice.