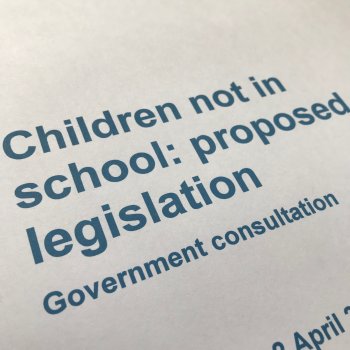 The National Secular Society has given its backing to a registration system for children who do not attend state-funded or registered independent schools, in a bid to tackle illegal faith schools and safeguard children's rights.

In a response to the government's 'Children not in school' consultation, the NSS stressed that all children's educational rights must be protected, irrespective of their religious background.

The consultation sought views on proposed legislation to establish a register maintained by local authorities of children not attending mainstream schools and duties on parents and the proprietors of certain educational settings.

The proposals would require the registration by local authorities of children who are home educated or for other reasons not registered at state-funded/registered independent schools.

The NSS said it was essential that local authorities can gather accurate information to enable them to exercise their statutory duties related to safeguarding children's welfare and ensuring they receive a suitable education.

It said registration was a "minimal imposition" in order to ensure elective home education (HME) is not used as a cover for unregistered and illegal religious schooling.

The NSS has for many years been at the forefront of raising awareness of the thousands of children kept out of mainstream schooling for religious reasons, who then end up in illegal, unregistered schools where they often receive only religious instruction.

At many unregulated faith schools, students are required to study religious texts, such as the Quran the Talmud and Torah, with secular studies such as Maths, English and science sidelined or not taught at all.

Pupils in unregistered Jewish yeshivas and Muslim madrasas are often schooled in squalid conditions with and a lack of safeguarding. Since 2014, more than 50 safeguarding alerts, including concerns of abuse or neglect, were raised at schools not registered with the government, according to the BBC.

Growing public concern over illegal schooling prompted the establishment Ofsted's unregistered schools team, which has identified more than 500 suspected illegal schools operating in England, educating thousands of pupils, over the past three years. A fifth (21%) were religious schools, including 36 Islamic, 18 Jewish and 12 Christian schools.

Earlier this year the NSS passed a file containing a number of known unregistered schools in the Stamford Hill area of London to the Department for Education.

NSS chief executive Stephen Evans said: "Illegal faith schools are responsible for some of the most egregious infringements of children's human rights. It should be a matter of national embarrassment that so many children are being left to languish in illegal religious schools that leave pupils hopelessly unprepared for anything other than life in an insular religious community.

"All children should enjoy the right to a decent education that leaves them equipped for adult life and fully able to integrate themselves into society.

"We therefore welcome measures to help councils identify children in unregulated settings and intervene where necessary. Registration should not be seen as an expression of suspicion against families who choose to home educate, but an essential and routine mechanism for protecting children's rights."

Proposals for a compulsory register of home-schooled children are also being backed by Ofsted and the Children's Commissioner for England, Anne Longfield who has said was "vitally important that we know that all children are safe and that they are receiving the education they deserve to help them to succeed in life."