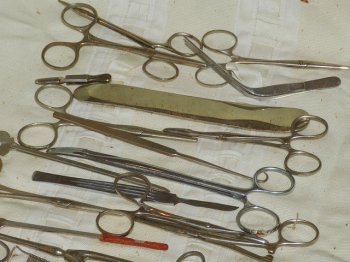 A two-year-old boy has died and his twin brother has been hospitalised after their genitals were cut for religious reasons at a migrant centre in Italy.

The boys were circumcised at the request of their mother, who wanted to mark Nigeria's Islamic traditions, according to local media reports.

An American man of Libyan origin has been charged with murder.

National Secular Society chief executive Stephen Evans said the death was "a reminder of the risks and harm associated with the ritual circumcision of baby boys".

The NSS campaigns for an end to non-consensual, non-therapeutic circumcision.

In recent years several other babies' deaths from circumcision have come to public attention. In 2010 a boy in Manchester died from circumcision wounds at the age of four weeks. A nurse was found guilty of manslaughter by gross negligence and given a suspended prison sentence.

In 2012 a boy from north London bled to death as a result of circumcision, as did a baby in the Canadian province of Ontario in 2013.

In 2009, 105 boys were treated at A&E at one hospital in Birmingham for complications after circumcisions. One per month had life-threatening injuries.

Traditional genital cutting ceremonies in sub-Saharan Africa are thought to have claimed hundreds of lives and hospitalised hundreds of thousands between 2008 and 2014 alone.

There is increasing medical scrutiny of the practice of male circumcision. In 2017 a Belgian federal government committee ruled against the circumcision of infant boys for reasons other than medical necessity.

In 2010 the Royal Dutch Medical Society (KNMG) advised doctors to discourage parents from having their sons circumcised, urging "a strong policy of deterrence". KNMG said any medical advantages of circumcision were significantly outnumbered by the risks and other disadvantages, such as the loss of up to 30% of erogenous tissue.

Studies have shown that male circumcision causes excruciating pain for the boys involved. The procedure also causes bleeding and infections. Its long-term health complications can include scarring, denuding of the skin of the penis, urinary difficulties, erection problems and psychological problems.

In 2018 lawmakers in both Denmark and Iceland considered bills to outlaw the cutting of healthy children's genitals, but faced strong opposition from religious groups.

The local mayor in the Italian case, Antonino Lupi of the town of Monterondo, described the death as "an absurd tragedy".

Some local groups have claimed the death illustrates the need for public institutions to offer genital cutting services to parents in Italy.