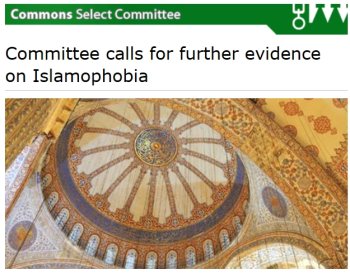 The National Secular Society has warned a parliamentary committee that recommending the adoption of a formal definition of 'Islamophobia' would risk undermining the right to free speech.

The NSS told the home affairs committee that the commonly-used term 'Islamophobia' conflated "legitimate criticism of Islam, or Islamic practices, with anti-Muslim prejudice, bigotry and hatred".

The society said the government "must not treat the civil liberties of British citizens as an afterthought in its efforts to tackle anti-Muslim prejudice".

The committee is currently gathering evidence on 'Islamophobia' after a parliamentary group recommended defining it as "a type of racism that targets expressions of Muslimness or perceived Muslimness".

The NSS's submission said the phrase "expressions of Muslimness" in the proposed definition could "effectively be translated to mean Islamic practices".

It noted that erroneous claims of 'Islamophobia' had acted as cover for prejudice, bigotry and illiberalism. It cited examples of claims being used to shut down criticism of Islamic views and customs affecting LGBT+ rights, women's rights, veiling of schoolgirls and the non-stun slaughter of animals.

"We reject the idea that any set of beliefs should be privileged or protected from criticism. In a liberal, secular democracy individuals should be afforded respect and protection. Ideas should not.

"Racism and anti-Muslim bigotry need to be challenged, but proposals to promote the vague concept of Islamophobia seriously risk restricting public discussion and making matters worse."

The NSS said silencing criticism of Islam would be "counterproductive to social cohesion". It added that it had become "impossible to fight for any internal change in Muslim communities" without being branded an 'Islamophobe'.

And the NSS said five proposed 'tests' on speech proposed by the parliamentary group would "render legitimate commentary and debate about Islam beyond the bounds of reasonable public debate".

The all-party parliamentary group on British Muslims called for the official definition of 'Islamophobia' in its report Islamophobia Defined, which was published in November. The NSS and others have since urged the home secretary Sajid Javid not to adopt the definition.

The home affairs committee has said its hearings were also partly prompted by a sharp rise in the number of anti-Muslim hate crimes being reported to the authorities in October.

The body which inspects police forces in England and Wales, Her Majesty's Inspectorate of Constabulary and Fire & Rescue Services (HMICFRS), has recently noted "significant problems with the way hate crimes are flagged".

In a report published in July, HMICFRS noted particular problems caused by the fact that those who report hate crime do not need to justify the belief that perpetrators' motivation was "one of hate".

The report said: "We are concerned that flagging hate crime incorrectly has serious implications for forces in terms of their ability to understand hate crime and how it affects victims and their communities, and then respond appropriately. Incorrect flagging also undermines the integrity of published national data and analysis."

The consultation is open until Monday 28 January. Those wishing to submit evidence can do so through the committee's page on the parliament.uk website.