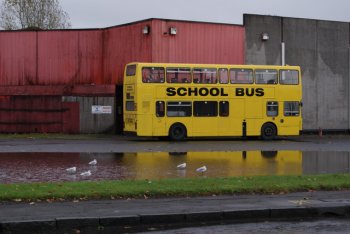 The National Secular Society has urged councillors in Wrexham in north Wales to take a decision on transport to faith schools based on "equality for all families and taxpayers".

The council's executive board will now consider the plans in the new year.

In a letter to all councillors the NSS's education and schools officer Alastair Lichten said it was "not reasonable to expect residents to fund services which give some parents a particular chance to send their children to schools which suit their ideological preferences".

"Decisions over the allocation of scarce public funds are always difficult and emotional. However, we urge you to take this decision on the basis of equality for all families and taxpayers in Wrexham. Those who choose to send their children long distances to faith schools should not receive privileged treatment."

Mr Lichten added that "an increasing number of councils" in Wales and England were deciding to reduce discretionary funding for free transport to faith schools.

Councils are required to provide free transport in a way that gives children at faith schools a degree of preferential treatment. Statutory school transport arrangements entitle low-income children to free travel over longer distances if they attend faith schools.

Wrexham is among councils which provide preferential treatment beyond the statutory minimum requirements. It currently provides a long-distance service to 17 faith schools. It estimates that the discretionary service costs £302,000 and benefits 406 children.

The council is reviewing the provision of some of its services in a bid to save £9m more than it has already budgeted for in 2019-20. Its review is also considering the future of services such as local libraries and fortnightly bin collections. It has proposed a six per cent increase in council tax.

It has said it has "no choice but to consider reviewing a large number of services" because of the "current financial challenge is it facing".

This week a council committee voted against taking the plans forward. But a poll in local newspaper The Leader suggested most Wrexham residents supported the removal of preferential treatment.

Some councillors who oppose changes to the service have claimed they would be discriminatory, but the council's lead member for environment and transport is among those who has refuted this claim.

Explaining his decision to write the letter, Mr Lichten said: "Councils should spend their residents' money in a way that benefits all of them based on genuine need. They shouldn't fund services which give unreasonable privileges to some while giving a raw deal to others.

"This review is also a reminder that the government should look again at the requirement to provide special treatment to families who send their children to faith schools nationally."

Local authorities are legally allowed to discriminate on the grounds of religion and belief when providing school transport as a result of exemptions contained in the Equality Act 2010.