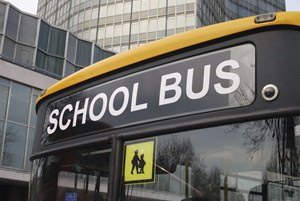 Councils in north Wales and Greater Manchester are considering cutting public funding for transport schemes which give preferential treatment to children who attend faith schools.

Wrexham Council has held a consultation over proposals to stop providing discretionary free travel for children who live more than two or three miles from faith schools. The council currently provides this even when children have non-faith schools nearer to their homes.

Meanwhile Stockport Council is considering cuts to a free bus pass scheme which gives extra help to families who send their children to faith schools.

The councils would still be required to provide free transport in a way that gives children at faith schools preferential treatment. Statutory school transport arrangements entitle low-income children to free travel over longer distances if they attend faith schools.

Local authorities are legally allowed to discriminate on the grounds of religion and belief when providing school transport as a result of exemptions contained in the Equality Act 2010.

Wrexham Council currently provides its service to 17 faith schools. The council estimates that this costs £302,000 and benefits 406 children.

The council is reviewing the provision of some of its services in a bid to save £9m more than it has already budgeted for in 2019-20. Its review is also considering the future of services such as local libraries and fortnightly bin collections. It has proposed a six per cent increase in council tax.

It has said it has "no choice but to consider reviewing a large number of services" because of the "current financial challenge is it facing".

Stockport Council is considering revoking free bus passes from children who do not receive free school meals or the maximum working tax credit. One effect of this would be to cut free travel which is specifically designed to help families send their children to faith schools.

"Councils should not give families who send their children to faith schools special treatment.

"When councils are facing significant cuts in other services or raising taxes substantially these preferential schemes become particularly indefensible. They could provide more free or subsidised transport for poor children if they didn't spend money on families who choose to send their children long distances to faith schools.

"And ultimately this requires change at the national level so taxpayers are not expected to fund other people's religious preferences."

In recent years several councils have reviewed their provision of discriminatory transport to faith schools. They include Reading Borough Council in Berkshire, Telford and Wrekin Council in the West Midlands and Lancashire County Council.

In 2015 a judge ruled that the state was not obliged to subsidise transport to and from faith schools, despite ruling in favour of a Catholic school in a case over subsidised school transport.

Over 3,000 people contributed to Wrexham's review. Its budget is due to be signed off by the full council in February.

In its consultation documents the council said it would "need to ensure that any changes made as a result of this review and consultation would be implemented at an appropriate time".