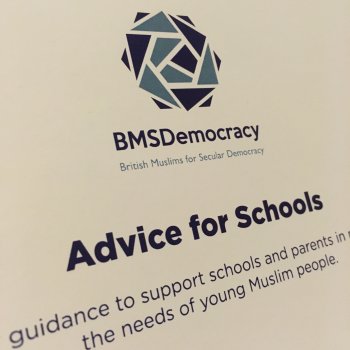 Pupils should be taught about evolution, art, and sexual relationships and no child should be forced to wear a hijab, says new guidance by a Muslim advocacy group.

The revised "Advice for Schools" guidance, published this week by British Muslims for Secular Democracy (BMSDemocracy), aims "to support schools and parents in meeting the needs of young Muslim people".

BMSDemocracy supports relationships and sex education (RSE) for every child, "including children at faith schools". Its guidance states that schools should adopt a "clear and assertive approach" which argues that withdrawing children from RSE "would not be in the best interest of the child". It also says that sex outside of marriage should not be stigmatised, and that LGBT issues be taught as part of a wider discussion on human rights.

The National Secular Society campaigns for impartial and objective RSE to be taught in all state-funded schools, including faith schools. Our 2018 study found that most state-funded secondary faith schools distort RSE by teaching it within the tenets of their faith.

BMSDemocracy's guidance also states that parents should not be able to withdraw children from cultural lessons such as art and music saying that "conservative religious taboos shouldn't stymie the prospective development of children". An independent Islamic school, Leicester Community Academy, was deregistered in September due to multiple failings, including denying boys the opportunity to study art.

The guidance also asserts concerns over 'modesty' should not prevent children from taking part in PE or swimming, saying "the only exemptions that should be allowed from swimming and PE are illness, justified leave, and menstruation". BMSDemocracy says that "the health of students takes priority over religious practice while pupils are in school".

Regarding science, the guidance states that teachers must "firmly back and teach" evolution as scientific fact "that is compulsory to learn". It adds, "Relativism is not an option."

On the issue of religious worship in schools, BMSDemocracy calls the law requiring daily Christian worship in all state schools "surprising" and highlights the fact parents have the legal right to withdraw from collective worship. The guidance references an NSS report that indicates schools can interpret the collective worship law "how they see fit". BMSDemocracy encourages "a neutral and inclusive assembly". The NSS has long campaigned for the law requiring acts of worship in schools to be repealed, and for all school activities to be secular and inclusive.

BMSDemocracy's guidance also responds to concerns regarding Islamic dress in schools. It highlights that challenges to school rules often "create an uncomfortable atmosphere" and "impede natural integration". The guidance upholds schools' right to decide uniform policies "without being unfairly or unjustly stigmatised and organised against", adding that "a uniform must mean a uniform."

The guidance gives the example of St Stephen's Primary School in Newham, which was forced to back down on its policies restricting hijabs and fasting following a campaign of "intimidation" from opponents.

BMSDemocracy acknowledges that while some adult women adopt Islamic dress through personal choice, others are "coerced" into wearing Islamic veils. It states that is against "prescribed veiling uniform policies". NSS research in 2017 found that the hijab is compulsory at dozens of schools in England.

On the subject of halal diets, the guidance says that vegetarian options are "often sufficient" to meet halal requirements. The NSS advocated vegetarian options in its response to Lancashire County Council's consultation on whether to cease supplying halal meat from animals not stunned before slaughter in school meals. The council voted last month to end supplies of most kinds of unstunned meat.

The NSS has identified at least 17 other councils supplying unstunned halal meat to schools, despite the controversial nature of non-stun halal slaughter.

NSS CEO Stephen Evans welcomed the guidance, saying it contained "some sensible and timely guidance for schools trying to navigate thorny issues concerning the manifestation of religion in schools.

"There are many points that we welcome in this guidance. We are concerned that religious practice is all too often prioritised over the education and welfare of school children, and we too have long advocated a secular, inclusive approach that puts the rights and needs of children first."

BMSDemocracy states its mission as "to advocate and support secularism (the separation of faith and state), tolerance, and equal rights, in both general British and specifically Muslim contexts". It also campaigns for "a secular British education system" and encourages "Muslim engagement within secular spaces".