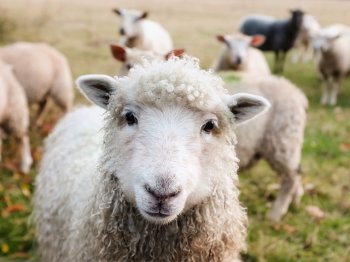 At least 17 councils across the UK are supplying non-stunned halal meat to dozens of schools, NSS research has revealed.

The NSS has found that around one in 12 councils provide non-stunned meat to schools, reaching thousands of children across Britain. At least one in nine councils which supply meat of any kind to schools supply non-stunned halal.

Non-stunned meat is reaching at least 140 schools, the significant majority of which are not Islamic faith schools.

In response the NSS said too many councils had bowed to a hardline interpretation of Islam, adding that the government should repeal the religious exemption to the UK's animal welfare laws.

One of the 18, Ceredigion County Council in mid-Wales, later told the NSS its initial response was "factually incorrect", saying all chickens in the supply chains for its school meals were stunned before slaughter.

One hundred and sixty-six councils do not supply non-stunned halal meat to schools. At least 40 of these do not supply meat for school meals at all.

Forty-seven councils only supply halal meat when it is stunned. Sixteen told the NSS they did not have the relevant information available, while two failed to respond.

Some local authorities insist all halal meat they supply must be non-stunned. Bradford Metropolitan District Council has an 87-page 'halal manual' which insists that animals must not be stunned before slaughter. The manual draws heavily on advice from Muslim theologians. The NSS wrote to the council in November 2017 to urge it to stop supplying non-stun meat.

The Halal Food Authority, a halal certification body which accepts pre-stunning for its main certification scheme, has told the NSS it is aware of increasing demand for non-stun meat in the UK.

According to official data there are 32 Islamic state schools in the UK. It is unclear how many of these schools are receiving non-stunned meat.

The NSS said the confusion around Ceredigion's response suggested other councils may be supplying non-stunned meat, and schools may be receiving it, without their knowledge.

Animal welfare legislation requires all animals to be stunned before slaughter in order to minimise suffering. The only exemption is for religious communities to meet Jewish and Muslim religious dietary preferences. The NSS campaigns for the repeal of this exemption.

In response to the findings NSS chief executive Stephen Evans said: "A significant number of councils are helping the non-stun slaughter industry to expand the supply of inhumanely slaughtered meat. If slaughter without stunning is to be permitted, no more animals should be slaughtered under the religious exemption than is absolutely necessary to meet demand.

"Councils shouldn't be supplying meat from non-stun slaughter en masse, particularly when a majority of Muslims are content with pre-stunned meat. Too many local authorities' catering policies are favouring those pushing a more hardline interpretation of Islam.

"And the UK government should take note of these findings. Councils need support to ensure the meat they supply is killed humanely. The simplest way to guarantee that is to repeal the unjustifiable religious exemption to the UK's animal welfare laws. All meat should be slaughtered in line with the advice of vets, not clerics."

The data has emerged as Lancashire County Council prepares to conduct a final vote on whether to end the supply of non-stunned meat to schools on Thursday.

The council currently supplies non-stunned halal meat to 27 schools with a total of 12,000 pupils. It voted to end the practice in October 2017 but has since undergone a lengthy consultation process.

In advance of today's vote the NSS has written to all councillors in Lancashire urging them to uphold the original decision. In the letter Mr Evans wrote that animal welfare was "the primary issue at stake".

"Slaughtering animals without pre-stunning causes avoidable pain and suffering and is entirely unnecessary. There is nothing anti-Muslim about wanting the council to only supply meat from animals farmed, including at the point of slaughter, to the highest standards of animal welfare."

The consensus among animal welfare experts is that stunning animals before slaughter is more humane than not doing so. The Farm Animal Welfare Council says animals slaughtered without pre-stunning are likely to experience "very significant pain and distress" before they become unconscious.

The EU's Scientific Panel on Animal Health and Welfare has stated: "Due to the serious animal welfare concerns associated with slaughter without stunning, pre-cut stunning should always be performed."

The RSPCA, Compassion in World Farming and the British Veterinary Association also advocate for all animals to be stunned prior to slaughter.

Note: This story was updated on 7 November 2018 to reflect the clarification received from Ceredigion County Council.