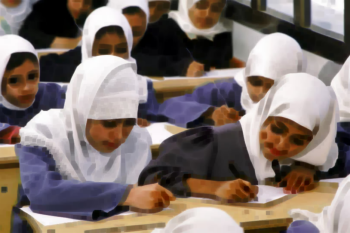 Girls in dozens of schools in England are forced to wear hijabs, according to National Secular Society research published in the Sunday Times today.

The NSS examined uniform policies on the websites of registered Islamic schools in England and found that girls potentially as young as four are instructed to wear the hijab as part of the official uniform policy.

Out of 142 Islamic schools that accept girls, 59 have uniform policies on their website that suggest a headscarf or another form of hijab is compulsory. This includes eight state-funded schools and 27 primary schools ­– three of which are state-funded.

In some cases the requirement is very explicit. At Feversham College in Bradford the policy states: "It is very important that the uniform is loose fitting and modest and that the hijaab is fitted closely to the head. The College uniform is COMPULSORY" (sic). Tayyibah Girls' School in Hackney states: "The school is not willing to compromise on any issues regarding uniform."

Girls at Al-Ihsaan Community College in Leicester are told they must wear either a "jilbaab or niqab." The jilbaab is a long loose-fitting garment which covers the body except the hands, face and feet. Redstone Educational Academy in Birmingham includes the jilbaab as part of the compulsory uniform. Olive Secondary in Bradford says that girls' faces "must be covered" outside.

Eighteen schools explicitly state in their online uniform policy that the hijab is optional. Thirteen of these are state-funded.

The NSS has written to the Secretary of State for Education, Justine Greening, about the issue. The letter called for the Government to ensure girls from Muslim backgrounds are supported to have free choices, rather than having so called 'modesty' codes imposed on them. It urged the Government to issue guidance making clear that a decision not to incorporate the hijab into a school uniform will be supported by the Government, and that the freedom to allow the hijab to be worn does not extend to primary schools.

"All schools have a duty to 'actively promote' individual liberty, to ensure young people leave school prepared for life in modern Britain," the letter said.

"In our view, the forcing of a child to wear the hijab, or any other item of religious clothing, is entirely at odds with this fundamental British value and with wider human rights norms on children's rights. This conflict needs to be addressed."

The letter has been co-signed by several feminists from Muslim backgrounds including Sara Khan of Inspire, Amina Lone of the Social Action & Research Foundation and human rights activist Yasmin Rehman.

NSS campaigns director Stephen Evans commented: "If individual liberty means anything it all, surely it means allowing young people to develop their own beliefs and decide for themselves how they choose to manifest them. Schools should be empowering girls to make their own decisions once they are ready to do so.

"Pupils from Muslim backgrounds should be supported to have free choices, not have so called 'modesty' codes imposed on them. No pupil should be forced to adopt religious practices or obliged to wear the hijab whilst at school."

The latest revelations come three weeks after it emerged that girls as young as five are wearing the hijab at school, as thousands of non-Islamic schools incorporate it into their uniform codes. The following week campaigners led by Ms Lone called for a "robust" response.

Text of letter send to Justine Greening, Secretary of State for Education, Minister for Women and Equalities

We write with concerns that British school children are being forced to wear the hijab and other items of religious clothing whilst at school.

Our research indicates that girls as young as four are being made to wear the hijab as part of an official school uniform policy. The wearing of the hijab appears to be compulsory in eight of the 23 publicly funded Islamic schools that accept girls – including in three primary schools.

The majority of independent Muslim schools also require the hijab to be worn, including one school that further requires children's faces to be covered outside of the school.

All schools have a duty to 'actively promote' individual liberty, to ensure young people leave school prepared for life in modern Britain.

In our view, the forcing of a child to wear the hijab, or any other item of religious clothing, is entirely at odds with this fundamental British value and with wider human rights norms on children's rights. This conflict needs to be addressed.

We are further concerned that a number of non-Islamic schools appear to be acceding to fundamentalist pressure to incorporate the hijab into their uniform. Whilst we fully support efforts to allow children from Muslim backgrounds to better integrate, a desire to be 'inclusive' should not automatically lead to the accommodation of illiberal and repressive cultural norms.

Given the 'justifications' that lie behind so called 'modesty' codes, and its implicit sexualisation of children, we regard it as a matter of deep regret that so many schools are facilitating young girls being dressed in the hijab.

Whilst policies permitted the wearing of the hijab are so often framed in terms of choice and freedom, we urge you to recognise that this 'freedom' is often dictated by social pressure.

Education policy should empower girls and help them to make their own decisions once they are ready to do so. We therefore call on you to work alongside Ofsted to ensure that girls from Muslim backgrounds are supported to have free choices, rather than having so called 'modesty' codes imposed on them. No child should be obliged to wear the hijab, or any other article of religious clothing, whilst at school.

With regard to accommodations made by other schools, we urge you to issue guidance that makes it clear that a decision not to incorporate the hijab into a school uniform will be supported by the Government. The guidance should also make clear that the freedom to make accommodations to allow the wearing of the hijab does not extend to primary schools.

Gina Khan, Spokesperson, One Law for All