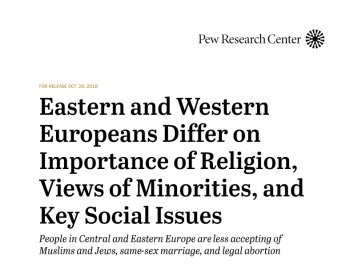 Britons convincingly support several important secularist principles but a significant minority of them have attitudes unwelcoming of religious minorities, a new study has suggested.

A report published by the internationally-respected Pew Research Center on Monday said 65% of British adults think it is not important to be Christian to be truly British. Thirty-four per cent disagree.

The study, which incorporated various figures on attitudes to religion from 34 European countries, also revealed that people across the continent are largely united in support of the separation of church and state. In 31 of the countries surveyed at least 50% of people said "religion should be kept separate from government policies".

Pew reiterated its previous finding that 60% of British adults believe this, while just 38% think "government should support religious values and beliefs". The NSS reported these figures earlier this year.

Ninety-two per cent of people think it is very or somewhat important to respect British "institutions/laws" to be truly British.

The survey also suggested Britons are largely disinterested in religion. Just 10% of respondents said religion was "very important in their lives". Six per cent prayed daily. Twenty per cent attended religious services at least once a month.

But the figures also suggested substantial proportions of Britons have attitudes unwelcoming of religious minorities. Just 53% of non-Muslims said they would be willing to accept Muslims into their families. Sixty-nine per cent of non-Jewish people said the same about Jews.

National Secular Society CEO Stephen Evans said the research highlighted "more evidence that secularist principles enjoy broad support in the UK". But he added that the "significant level" of mistrust in religious minorities was "a cause for concern".

"It is encouraging to see that most Britons are keen to separate religion from public policy and do not see religious identity as a barrier to Britishness.

"But the government should take note of the alarming level of mistrust between different religious groups in the UK. The way to improve these numbers is to promote common citizenship where religion is a private detail rather than a reason for the state to treat people differently.

"Treating Britons as members of competing identity groups based on religion has fuelled social segregation and encouraged unpleasant attitudes to foment.

"An obvious place to begin addressing this is in schools. Rolling back state-funded faith schools and educating children together would be an important step which would encourage social harmony over the long term."

The NSS campaigns on several of the issues raised in the survey, including the disestablishment of the Church of England and the protection of the principle of one law for all.

Last year a YouGov poll for The Times found that 65% of British adults thought political figures should keep their religious beliefs cordoned off from their decision making. In that survey just 14% said the opposite.

In western Europe most people did not think it was important to be Christian to truly share their national identity. In most eastern European countries the figures suggested the opposite.