Religion and politics should not mix, says British public 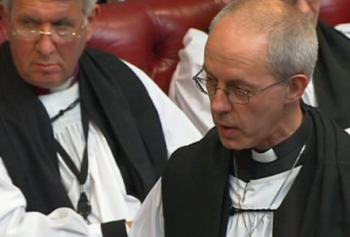 A majority of British people want religion kept out of politics and bishops to lose their automatic right to sit in the House of Lords, according to a survey.

The YouGov poll for the Times questioned around 1,700 people about their views on politicians allowing their religious beliefs to influence their political decisions and whether Church of England bishops should retain their guaranteed seats in the legislature.

Sixty-two per cent said that no religious clerics should have "an automatic right to seats". Only 8% of people said the bishops should retain their seats; 12% said leaders from other faiths should be added to sit alongside bishops as Lords Spiritual and 18% said they did not know.

Sixty-five per cent of respondents thought political figures should keep their religious beliefs cordoned off from their decision making, with just 14% saying the opposite. The remaining 21% chose neither option or said they did not know.

The findings echo the recommendations of the National Secular Society's Manifesto for Change, which urges a fundamental rethink of religion's public role and specifically calls for an end to automatic seats for religious clerics.

"Separating religion from the state would mean our political structures reflect the reality of changing times, but would also ensure every citizen can be treated fairly and valued equally, irrespective of their religious outlook.

"Britain is now one of the most religiously diverse and, at the same time, non-religious nations in the world. Rather than burying its head in the sand, the state needs to respond to these fundamental cultural changes and initiate reform.

"Given the public support for such reforms, we would encourage politicians of all stripes to find common cause in promoting secularist principles and making sure our public institutions equally welcome and respect those of all faiths and none. Such a change is long overdue."

In January 2018 all MPs will receive a copy of the National Secular Society's latest report Separating Church and State: The Case for Disestablishment which argues that disestablishment is right both as a basic matter of principle and in order to make the UK more representative of the changing landscape of religion and belief. It says Prince Charles's accession to the throne will offer a "particularly opportune moment" to press the benefits of disestablishing the Church of England.