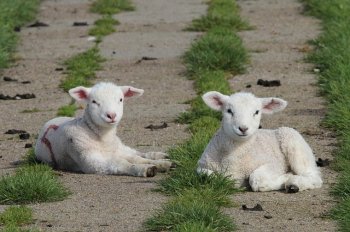 The National Secular Society has said a government agreement to sell meat from lambs slaughtered without stunning to Saudi Arabia will "normalise the mistreatment of animals".

According to Vet Record magazine, the Halal Monitoring Committee (HMC) will certify meat sold to Saudi as part of a £25m deal announced in February. HMC refuses to certify meat as halal when it has been stunned before slaughter.

The deal, which was initially announced by food minister George Eustice, brings a 20-year embargo on lamb exports to Saudi Arabia to an end. It has only now emerged that the meat will not be stunned.

NSS campaigns officer Megan Manson said the deal would "empower a group which undermines animal welfare in Britain and normalise the mistreatment of animals".

"The government shouldn't be selling millions of pounds' worth of meat from animals treated inhumanely in the name of religion. Nor should the Halal Monitoring Committee's fundamentalist interpretation of what constitutes halal meat play any part in government decisions.

"Animal welfare laws exist for a reason. If they are important enough for some to follow, they must be important enough for all to follow. Instead of striking deals like this the government should roll back the religious exemption to animal welfare laws so veterinary experts, not religious groups, set the standard on the treatment of farm animals."

Most halal meat in the UK is stunned before slaughter but NSS research has revealed that non-stunned halal is widespread in UK supermarkets.

In November the government told the NSS it was considering introducing labelling requirements to ensure consumers know whether halal or kosher meat has been stunned before slaughter. The NSS welcomed the move but called on the government to end the religious exemption to animal welfare laws.

Animal welfare groups have also criticised the deal with Saudi Arabia. Marc Cooper, the head of the RSPCA's farm animal department, called it "very disappointing news" and said the government should "follow other European nations and ban the export of meat from non-stunned animals".

"We have a responsibility to push forward the global animal welfare agenda, by ensuring farm animals are treated as humanely as possible and paying full regard to standards when establishing trade deals.

"This does not bode well, as post-Brexit the UK will inevitably receive pressure from new trading partners to open markets to low-welfare animal products."

The RSPCA, Compassion in World Farming and the British Veterinary Association have all criticised non-stun slaughter, along with many animal welfare experts. The Farm Animal Welfare Council – a UK government body – has said the practice should be banned. The EU's Scientific Panel on Animal Health and Welfare has said "pre-cut stunning should always be performed".

The Department for Environment, Food and Rural Affairs (Defra) has said the deal was not "a move to increase sales of non-stun meat" and denied it will lead to animal welfare standards being "watered down".

Meanwhile Labour MP Kerry McCarthy, a former shadow environment secretary, criticised the deal but implied support for the religious exemption when meat is consumed domestically. "The exemption is clearly there to meet the needs of our own religious communities, not those abroad," she said.