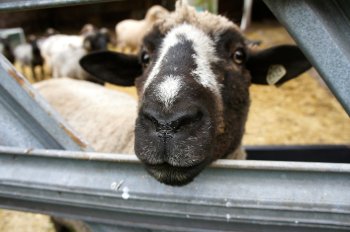 The National Secular Society has written to Bradford's district council to urge it to stop supplying un-stunned halal meat in schools and other establishments.

Last month Lancashire County Council voted to stop supplying halal meat from animals that have not been stunned before slaughter to schools. But NSS research has exclusively revealed that Bradford Metropolitan District Council is among those which continue to supply un-stunned halal meat.

Its 87-page halal manual says it is "absolutely essential" that animals slaughtered for halal meat "…must not be stunned, anaesthetised or otherwise rendered wholly or partially insensible before slaughter".

The manual has been written under the guidance of Bradford Council for Mosques and 'Muslim scholars', and contains lengthy discussions on the Qu'ranic definitions of halal. However, animal welfare issues surrounding the non-stun slaughter process are not addressed in the manual. Farming associations, veterinary associations and other authorities on animal welfare do not appear to have been consulted.

Additionally, the council works under the close scrutiny of Bradford Council for Mosques in implementing its halal policies. The manual specifies that "to maintain the confidences of the Muslim community the council welcomes the Council for Mosques and approved Muslim observers to monitor procedures and working practices in school kitchens by prior arrangement with schools." Moreover, whenever the supplier of halal meat changes, "the Council for Mosques must be informed so that approval can be sought and inspection of source/supplier arranged".

In a letter to Councillor Susan Hinchcliffe, the leader of Bradford Metropolitan District Council, NSS campaigns director Stephen Evans wrote: "It should be noted that halal is not synonymous with non-stun slaughter. In the production of halal meat, pre-stunning is common, both in Muslim majority nations and in the UK.

"Whilst there is no consensus regarding what constitutes halal, the majority of halal meat sold in the UK is from animals stunned before slaughter, indicating that most Muslims accept electrical pre-stunning prior to the cut as being consistent with halal requirements."

Other councils acknowledge that non-stun slaughter is unnecessary and cruel, and for this reason they only supply stunned halal meat to schools. Geoff Driver, the council leader who called for the vote in Lancashire, told the Lancashire Telegraph: "In my view, with modern methods of reversible stunning, there is no need for animals to suffer during slaughter."

And in response to a freedom of information request in 2014, Aberdeen City Council said:

"Our suppliers take animal welfare very seriously. All farmed animals which are slaughtered for their products are done so humanely, in accordance with EU and UK law… Traditional halal slaughter, which forbids the stunning of animals, is a practice which is not accepted by our suppliers on animal welfare grounds."

In response to the latest revelations, Mr Evans added: "Animal welfare issues aside, it is extremely concerning that the council is formulating its policies based on hardline Islamic ideology."

The NSS will continue to investigate the halal policies of councils throughout the UK and contact those that supply non-stunned halal to encourage them to cease.