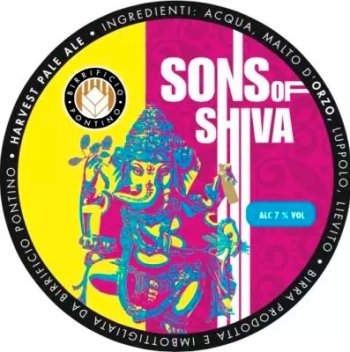 The National Secular Society has warned of the need to resist "a competitive offence-taking culture" among religious groups after a Hindu group asked an Italian brewery to withdraw a beer.

Rajan Zed, the president of the Universal Society of Hinduism (USoH), asked Pontino Brewery in central Italy to apologise and stop selling its 'Sons of Shiva' beer this week. The label of the beer, an American IPA, carries an image of Hindu deity Ganesh holding a bottle in one hand.

In a statement on his website, delivered from the US state of Nevada, Zed claimed the use of the image was "highly inappropriate" and said "linking a Hindu deity with an alcoholic beverage was very disrespectful".

"Lord Shiva and Lord Ganesha were highly revered in Hinduism and were meant to be worshipped in temples or home shrines and not to be used in selling beer for mercantile greed."

In 2016 Zed played a prominent part in a social media campaign against Amazon based on the fact it was selling doormats with Hindu gods on them, along with other doormats featuring Christian and Muslim symbols. Amazon removed the doormats in response.

In recent months Zed and USoH have called on a museum in Chicago to withdraw a doll of Lord Shiva from sale and called on Adidas to rename a brand of shoes named Holi.

The latest row comes shortly after two large breweries in the UK ordered their pubs to take down the Saudi Arabian flag on the basis that it contains an Islamic statement of faith. Greene King and Mitchells & Butlers both said including the flag in their World Cup displays in a place where alcohol was sold would be "inappropriate".

The National Secular Society wrote to the two breweries and strongly criticised their decision.

In May a German brewery, Eichbaum, withdrew a marketing campaign featuring the World Cup participants' flags on beer bottle caps after complaints that the Saudi flag should not appear on beer bottles.

Last November the British bakery Greggs apologised for producing an advert with a sausage roll in a nativity scene after some Christians publicly took offence.

NSS spokesperson Chris Sloggett said Zed was "entitled to take offence if he wishes" but his demands should be "dismissed out of hand".

"This is the latest reminder that giving ground on free speech encourages a competitive offence-taking culture which erodes the boundaries of the private sphere.

"Companies should stand up to the bullying tactics religious groups are employing to enforce de facto blasphemy codes, including when those demands cross national boundaries.

"They may think it is easier to take the amoral path of least resistance. But if they give in they will encourage further demands to control the free expression of private individuals and enterprises, including themselves."