Brewery: we took down Saudi flag from pubs to avoid offence 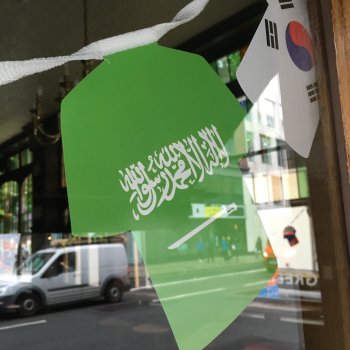 A brewery which instructed thousands of pubs to take down the Saudi Arabian flag from World Cup displays has told the National Secular Society it acted to avoid causing offence.

Earlier this month Greene King said it had decided to remove the Saudi flag from bunting put up to mark the tournament, which is currently taking place in Russia. It said displaying the flag would be "inappropriate as it contains the religiously significant Islam shahada in Arabic".

The brewery said it had received complaints from "some customers in London" over the display of the shahada (a declaration of faith) in a place where alcohol was sold.

In response the NSS wrote to Greene King and Mitchells and Butlers, which also instructed its pubs to take down the flag a few days later.

Greene King has now replied to say the brewery's intention was "to celebrate the World Cup and not to offend anybody".

"We took this decision to avert any further offence being caused and believe it was the correct decision.

"It is not our place to pass comment on any nation or wider religious discussions and debates. Everyone is welcome at Greene King and our customers are as diverse as our 40,000 colleagues.

"We are looking to celebrate the World Cup and as a customer-facing business we responded when we received customer feedback that pointed out facts of which we were not previously aware.

"We continue to celebrate the World Cup and the international spirit it demonstrates."

Mitchells & Butlers has yet to reply to the NSS. Earlier this month it said on Twitter that it had removed the flag "as it is inappropriate to display where alcohol is being sold".

"The breweries have given some of the most zealous religious believers a veto over the use of a flag.

"Greene King has said it is not its place to pass comment on religious debates. This is a remarkable statement because that was exactly what it did. It chose to remove one of the 32 competing nations' flags and justified its decision by pontificating about what may or may not be appropriate within Islamic tradition.

"Our society will be in trouble if companies make it the norm to acquiesce to unreasonable demands like this. If we don't defend free expression, we lose it – and we all have a stake in making sure that doesn't happen."

Greene King owns more than 3,100 pubs in England, Wales and Scotland. Mitchells & Butlers operates more than 1,700 pubs and restaurants across the UK.

Last month a German brewery, Eichbaum, withdrew a marketing campaign featuring the World Cup participants' flags on beer bottle caps after complaints that the Saudi flag should not appear on beer bottles.

Read more: It shouldn't be normal for pubs to conform to blasphemy codes, an NSS blog by Chris Sloggett.