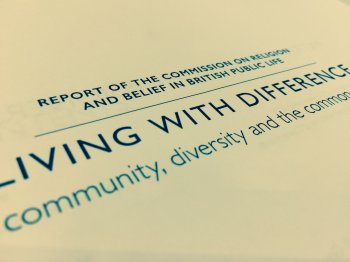 A major new report on the role of religion and belief in public life has been criticised by the National Secular Society for calling for a multi-faith approach "completely at odds with the religious indifference that permeates British society."

The NSS said the Woolf Commission is "wholly misguided" in calling for religious representation in the House of Lords to be extended to representatives of other faiths and denominations rather than calling for the abolition of the bench of bishops.

The NSS is also critical of the Commission's recommendations on education, which it accuses of being "tokenistic" and of "not going remotely far enough".

The report acknowledges the "negative practical consequences of selection by religion in schools" and states: "selection by religion segregates children not only according to religious heritage but also, frequently and, in effect, by ethnicity and socio-economic background".

It notes that many religiously "devout" people "are opposed to religious selection in pupil admissions" and says that "there are many and increasing numbers of parents in England who do not want to send their children to a religious school, but whose only choice of a state school locally is a religious one."

In spite of this criticism, the report does not call for an end to faith schools, or even for the statutory elimination of discrimination. The report merely calls on bodies responsible for school admissions to "reduce selection on grounds of religion" in both pupil admissions and employment practices.

The Commission does however join the growing chorus of calls for the requirement on schools to provide a daily act of worship to be abolished – a move long called for by the National Secular Society; an amendment to the Education Bill in 2011 tabled by NSS honorary associate Lord Avebury to achieve this was opposed by both Government and Church.

The report was convened by the Woolf Institute, which studies relations between Christians, Muslims and Jews. Patrons include the former archbishop of Canterbury Rowan Williams, Iqbal Sacranie, former general secretary of the Muslim Council of Britain (who once said of Salman Rushdie: "Death, perhaps, is a bit too easy for him .. his mind must be tormented for the rest of his life unless he asks for forgiveness to Almighty Allah"), and Lord Woolf, the former chief justice. Its 'Commission on Religion and Belief in British Public Life' was chaired by Baroness Butler-Sloss.

"There are some sensible recommendations in the Commission's report, but on the whole it clearly reflects the overbearing influence of vested interests and their reluctance to make recommendations for any fundamental change, however necessary. Disestablishing the Church of England should be a minimum ambition for a modern Britain in the 21st century."

"This report seeks to promote a multi-faith approach to public life which is completely at odds with the religious indifference that permeates British society. Efforts to accentuate religion across public life in schools, higher education, in the House of Lords, national state occasions and through taxpayer-funded chaplaincy, all serve to marginalise the religiously indifferent who support the freedom to believe and worship, but would like also to be left free from religious interference in their own day-to-day lives.

"What we have at the moment is a secularised country – one of the most secular in outlook in the world – but one still dominated by a disproportionate level of religious influence. This report would see that interference strengthened at all levels of society."

"The report is right to highlight the divisive nature of faith schools but fails recognise that religious discrimination and social segregation are an inevitable result of having faith schools in the first place. Instead of faith-based education we need a truly inclusive secular education system in which religious organisations play no formal role – however unpalatable that may be to faith communities seeking to use publicly funded schooling to prop up their religion. The report doesn't even call for the minimum to make any difference: the repeal of equality law exemptions that allow for discrimination on grounds if religion or belief in admissions and employment."

Extended religious representation in the House of Lords

Perhaps the most controversial and self-serving of the Report's recommendations however is for the House of Lords to "include a wider range of worldviews and religious traditions, and of Christian denominations other than the Church of England." Such a move could see a reduction in the number of bishops and places given to imams, rabbis and other non-other non-Christian clerics as well as evangelical pastors.

On that specific recommendation, Mr Wood commented: "We completely reject this recommendation. The United Kingdom is unique among Western democracies in giving religious representatives seats in its legislature by right. The vast majority have abandoned all links between religion and State, with no discernible adverse consequences.

"We believe it is now time to remove the automatic right of Church of England Bishops to sit in the House of Lords. It is also vitally important that a reformed Second Chamber should not have any religious-based representation whether ex-officio or appointed, whether of Christian denominations or any other faiths. The presence of religious leaders amounts to double representation of religious interests as many temporal peers already identify themselves as being religiously motivated.

"Most Christian leaders are very much more morally conservative than their followers and those of minority faiths significantly more so than the public. A second chamber with a greater input from such voices would make it significantly less representative of the nation as a whole."

Mr Wood commented: "As a publicly provided service, the NHS should neither discriminate in employment nor service provision. NHS posts should no longer be ring-fenced for people of certain beliefs; such blatant discrimination is not acceptable for any publicly-funded post. Any explicitly religion or belief based representation in hospitals should be paid for by the organisations they represent or funded by charitable trusts, just as the air ambulance service is. Pastoral care funded and provided by the NHS itself should be secular in nature, not be organised around religious identities."

The report also calls on those responsible for national and civic events "to ensure that the pluralist character of modern society is reflected".

Commenting on this proposal, Mr Wood said: "Our national and civic events, including the Remembrance and the Coronation, would be more inclusive and relevant if they were secular in nature and not led by the religious. We saw in Paris recently that national ceremonies can be conducted on a secular basis and still have dignity and, more importantly, inclusiveness."

The report also calls for the introduction of a 'statutory entitlement' for pupils to learn about religions and non-religious worldviews. It also says attempts should be made to "increase religion and belief literacy amongst all journalists and says "every newsroom" should retain "at least one religion and belief specialist". In addition it recommends a 'panel of experts' on religion and belief to handle complaints about the media.

The National Secular Society dismissed this as "a dangerous idea". "No-one should be able to dictate to the press how religion is reported. The media should be completely free from this sort of manipulative pressure", said Mr Wood.

Other recommendations includes further examination of the issues arising from religious tribunals "with a view to disseminating best practice" and Radio 4's Thought for the Day slot to be extended to include contributions from those who will speak from a non-religious perspective. The NSS said the slot in the Radio 4's Today programme was a "religion-promoting anachronism" that should be dropped.

In a recommendation backed by the NSS, it also calls for counter-terrorism legislation to be framed in such a way as to "promote, not limit, freedom of enquiry, speech and expression".

The Baroness Butler-Sloss says that the 144-page report's recommendations amount to a "new settlement for religion and belief in the UK".

Keith Porteous Wood said: "Britain urgently needs a new settlement but, for the most part, this report doesn't represent a sensible way forward. Instead of a multiculturalist, multifaith framework, which has serves us so poorly until now, we need a secular framework where everyone is equal before the law and where citizens interact with the state as equals, not as members of religious communities through a group identity. In a society as irreligious as ours, where religious belief is declining and simultaneously diversifying, this is a vital principle. It offers our best hope of fostering a fair and open society in which people of all religions or none can live together harmoniously and as equal citizens."