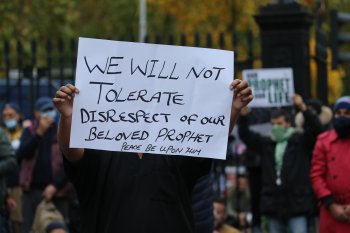 With cinemas pulling the plug on a 'blasphemous' new film, the ugly spectre of religious censorship has again returned to the UK. Citing 'security concerns', cinema chains have cancelled screenings of The Lady of Heaven, a historical drama concerning the life of Lady Fatima, the daughter of the prophet Muhammad.

Cinemas acted in response to a series of protests in Birmingham, Bolton, Bradford and Sheffield by groups of Muslim fundamentalists who insisted the film should not be shown.

The pattern of events is depressingly familiar. Something subjectively deemed 'offensive' is published; so called 'community leaders' whip up outrage; angry mobs descend; then, as sure and night follows day, the 'sinners' repent, buckle under the pressure and self-censor in the hope of a quiet life – or perhaps just life, full stop.

Ever since the "Rushdie affair" in 1989 when the late Ayatollah Khomeini, then the supreme leader of Iran, issued a religious decree or 'fatwa' condemning Salman Rushdie to death for writing a book he'd never even read, we've seen countless attempts to shut down expressions that people find offensive.

British Muslims who protested Rushdie's novel, The Satanic Verses, were outraged that their deepest beliefs had been offended and demanded censorship.

Blasphemy laws were still on the statute books in England at the time, but they were widely regarded as dead letter laws. And besides, they only covered the tenets and beliefs of the Church of England.

The events were a low point for community relations in Britain. The Blair government reacted by bringing forward legislation to criminalise "incitement to religious hatred". The new law was described by Salman Rushdie at the time as "a cynical vote-getting attempt to placate British Muslim spokesmen, in whose eyes just about any critique of Islam is offensive."

Secularists and other free speech campaigners warned that the proposed law would dramatically hinder free speech. The bill passed, but only after a vital free speech amendment was secured, by 288 to 278 votes, which protected "discussion, criticism or expressions of antipathy, dislike, ridicule, insult, or abuse of particular religions, or the beliefs or practices of its adherents."

Nevertheless, the Rushdie Affair and the subsequent government pandering to religious leaders ushered in a new era of identity politics, giving rise to a growing culture of offence whereby people feel they have a right not to be offended.

It also marked the start of a new kind of blasphemy code, imposed not by law but by intimidation and the threat of violence.

Early examples of this include theatres cancelling performances of Jerry Springer: The Opera after an extremist Christian advocacy group threatened to picket them.

Soon after, Birmingham's Repertory Theatre prematurely ended the run of Behzti (Dishonour), a play that depicted murder and rape in a Sikh temple, after violent protests by Sikhs. The leader of the local gurdwara reasoned: "Free speech can go so far. Maybe 5,000 people would have seen this play over the run. Are you going to upset 600,000 Sikhs in Britain and maybe 20 million outside the UK for that?"

The theatre's executive director admitted that the play's closure amounted to censorship, but said he had a "duty of care to staff and audiences".

Then came the pulling of The Jewel of Medina, a historical novel by Sherry Jones that recounts the life of Aisha, one of Muhammad's wives, from the age of six.

The book was all set for publication by Random House when it was abruptly cancelled due to concerns about possibly "inflammatory content".

British publishing house Gibson Square stepped up and decided to publish the book instead, with its founder Martin Rynja calling for "open access to literary works, regardless of fear". Three days later his London home was firebombed. The book was pulled. The Jewel of Medina has never been published in the UK.

A similar picture was emerging across Europe. In November 2004, the Dutch filmmaker Theo van Gogh was killed on a busy street in Amsterdam. Murdered because of a documentary he made with ex-Muslim Ayaan Hirsi Ali, which criticised the treatment of women in Islam. His assailant, a Dutch-Moroccan Islamist, objected to the film's message.

Then came the Jyllands-Posten Muhammad cartoons controversy, when the Danish newspaper Jyllands-Posten published 12 editorial cartoons most of which depicted Muhammad, in an attempt to "contribute to the debate about criticism of Islam and self-censorship". Muslim groups in Denmark objected, and the issue eventually led to protests around the world, including violent demonstrations and riots.

Not long after, Islamist extremists stormed the offices of the French satirical weekly newspaper Charlie Hebdo, which had published Muhammad cartoons, brutally killing 12 people and injuring 11 others.

Back to the UK, and this week's events are reminiscent of last year's Batley affair. Then, Muslim protestors gathered outside school gates objecting to the use of teaching resources about free speech which featuring images of Muhammad. A teacher was forced into hiding fearing for his life, and the school capitulated. The fears were understandable. The previous year a teacher in France, Samuel Paty, was stabbed and beheaded by an Islamist militant for having shown cartoons of Muhammad in a class on freedom of expression.

It's easy to condemn those who succumb to the mob, but who in their position can say hand on heart that they would stand up the bullying and intimidation, when the repercussions have the potential to seriously harm those they have a duty to protect?

Even The Freethinker, one of the world's oldest surviving freethought publications, has said it will no longer publish Jesus and Mo cartoons because it has "no faith in the ability or willingness of the UK authorities to ensure that our right to freedom of speech is defended against extremists."

Outside one of the cinemas targeted this week, Islamist rent-a-mob ringleader Shakeel Afsar (who also popped up in Batley and led anti LGBT inclusivity protests outside a school in Birmingham) said:

"The city of Birmingham will not tolerate the disrespect of our prophet (pbuh) and there will be outcomes from your actions. You will have repercussions for your actions. We have been trained from birth that we must defend the honour of our prophet and we will lay our life on the line."

There is no right not to be offended and blasphemy isn't a crime. But there are laws that ban incitement to violence. Anyone doing so should be held accountable. There is a limit to free speech. And this is where the line should be drawn.

It's lamentable that in modern Britain a handful of religious fundamentalists can dictate what people can and cannot watch at the cinema. As Malik Shlibak, executive producer of the film, said: "While I support the right to protest among those opposed to the film, I do not support their aim of censoring what the British public can and can't watch." Shlibak has since received death threats.

Not screening films based on what people subjectively find offensive is incompatible with freedom of expression. If this cornerstone of liberal democracy is to mean anything, it must apply to expressions that offend. And this principle must be robustly defended.

The impact of this pernicious form of censorship goes well beyond the books and films that get cancelled. It extends to all the words that never get written, all the things that never get said, and all the art that never get made, through the act of self-censorship.

Political leaders and civil society need to be much clearer that religion's sacred cows – or any other sincerely held ideologies for that matter – are not beyond discussion, criticism, depiction or mockery.

Pandering to fundamentalism is not the way to a more open, tolerant and peaceful society. Promoting free speech as a positive value is the way. This is a lesson that needs to be learned. And fast.