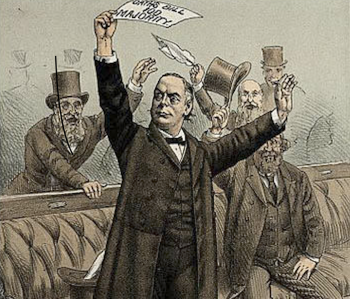 The funeral of Charles Bradlaugh – parliamentarian, activist and founder of the National Secular Society – took place at Brookwood Cemetery on Tuesday 3 February, 1891, four days after his death. Brookwood is 25 miles from London and the funeral was to be low key. According to the terms of the dead man's will he was to be buried as cheaply as possible and the affair was to be silent, with no speeches, no ceremony.

It didn't turn out like that as in a huge wave of spontaneous grief, gratitude and adoration thousands made their way to Brookwood by railway and down country lanes. Estimates of the attendance vary widely – nobody kept count – but thousands were there and this may well have been the largest event ever witnessed at the nation's largest cemetery.

Attendees came from far and wide and from all Britain's great cities. There were miners from the north, soldiers in bright uniforms from Bradlaugh's old regiment and Indians in large numbers. Northampton, Bradlaugh's parliamentary constituency, was represented by many wearing rosettes in Bradlaugh's colours of mauve, white and green. A young David Lloyd George was there, among 17 other MPs. Walter Sickert who had painted a number of Bradlaugh portraits was present, as was a young Indian law student, Mohandas Ghandhi. George Jacob Holyoake attended alongside other leading secularists such as the redoubtable Annie Besant and the marquess of Queensbury.

So, what was it about Bradlaugh that provoked such a response?

Throughout his life Bradlaugh was the friend of the underdog, the under-privileged and the downtrodden. It was his fervent belief that the answer to their woes lay in a more open, secular, democratic and liberal society. To this end he achieved two great victories.

First, there was his and Annie Besant's success in establishing the right to publish cheap birth control literature. In 1877 they had republished Charles Knowlton's "Fruits of Philosophy", a pamphlet advocating contraception and advising on contraceptive techniques. Shortly before, a Bristol bookseller had been convicted and imprisoned for selling the pamphlet and the previous publisher had withdrawn it from circulation. Bradlaugh and Besant were prosecuted. They defended themselves and were acquitted, striking a substantial blow for freedom of the press and speech. Further couples' endeavours to control the size of their families were aided at a price they could afford. It had always been Bradlaugh's conviction that large families were a principal cause of poverty and the subjugation of women.

Second, there was Bradlaugh's long and ultimately successful battle to take his seat in parliament. As a constitutionalist Bradlaugh had long harboured the ambition to secure election to parliament and in 1880 he was returned as one of Northampton's MPs.

The problem was that to take his seat he was required to take an oath, on the Bible, of loyalty to God and the queen. He believed in neither. Bradlaugh asked to affirm (a non-religious oath) but was told he could not. He therefore prepared to take the oath because he considered the words less important than his duty to serve his constituents. However, some MPs objected because of his atheism. The speaker ruled in their favour and he was effectively barred from taking his seat, prompting a by-election.

Four times Bradlaugh returned to Northampton to contest elections and each time he won. Once he tried to take his place in the chamber of the House of Commons demanding that the oath be administered, but was arrested and imprisoned in the Palace of Westminster overnight. It was not until 1886 that a new speaker allowed him to be sworn in. Bradlaugh had triumphed. An important democratic right had been established, and the episode served as a reminder that MPs sit in the House of Commons by virtue of their election, rather than others' opinion of their views.

So Bradlaugh was responsible for two very significant victories for secular, liberal democracy. And there's also the issue of his character and personal qualities. His most recent biographer is Bryan Niblett. In the preface of his aptly titled book Dare to Stand Alone, Niblett explores the development of his understanding of heroism:

"The battles that Bradlaugh fought were battles of the mind, played out on public platforms, in courts of law, and in political debating chambers. This supplied a new dimension to my understanding of heroes, the recognition that the virtue of thinking for oneself of engaging in action founded on reason as the guiding principle, was the essence of real heroism… One man, relying on reason, and daring to stand alone, can make a difference in the world."

Those assembled at Brookwood on that day in 1891 came together because collectively they recognised a great man's achievements and his qualities.

Today the NSS is a modern campaigning organisation. However, it is intensely proud of its past and its foundation in 1866 by Charles Bradlaugh, a great Victorian, radical and secularist.

You can help to restore Charles Bradlaugh's grave by donating to our appeal. There will also be an event to mark the restoration at Brookwood Cemetery on 17 October – if you'd like to attend, please let us know by emailing events@secularism.org.uk.

Donate to our appeal to restore the grave of our founder, Charles Bradlaugh.