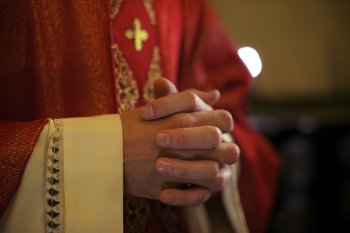 With the Scottish parliamentary election approaching, Scotland's Catholic bishops have urged the faithful to play their part "in putting human life and the inviolable dignity of the human person at the centre of Scotland's political discourse".

In a pre-election 1,000 word pastoral letter, distributed via Scotland's 500 Catholic parishes, the bishops ask Catholic voters to give consideration to several key areas of concern, including family and work; freedom of expression, thought, conscience and religion; and Catholic schools.

The National Secular Society and the Catholic Church have been, unusually, aligned on the subject of free speech in Scotland in recent months. We were both among those who warned that the hate crime bill, which recently became law, would unreasonably restrict freedom of expression. Our lobbying helped to secure amendments which will go a long way toward protecting freedom of speech, particularly on religion.

So in principle I agree with the bishops that voters should caution politicians against imposing "unjust restrictions on free speech, free expression and freedom of thought, conscience and religion" - although naturally our opinions on what constitutes a reasonable limitation to religious freedom is likely to differ in many instances.

But too often the Catholic Church's teachings have been instrumental in undermining the rights of others. And much of the bishops' letter should serve as a reminder of the dangers of allowing religious dogma to drive political decisions.

For instance, the bishops call for Catholic schools to "be allowed to flourish". This is merely a self-interested plea for outdated sectarian schooling to persist. As well as enabling religious groups to proselytise with public money, religious schools foster segregation of children and undermine equality.

The bishops talk of the "right of parents to choose a school for their children which corresponds to their own convictions", saying public authorities have a duty to guarantee this parental right. This is true. But there is no obligation to provide funding for religious schools. If parents really want their child educated within their religious tradition, they can do that, but they shouldn't expect the state to support that choice with public money. A better use of public money is to provide schools that are open, inclusive and equally welcoming to all children whatever their religion and belief backgrounds.

If politicians want Scotland to be a tolerant, open, diverse country, then making sure children of all faith and belief backgrounds are educated together is an obvious starting point.

Meanwhile the church appeals to "human dignity" as it, predictably, makes the case against abortion rights and assisted dying.

On abortion, the church claims that "caring for the unborn and their mothers is a fundamental measure of a caring and compassionate society"; elsewhere it talks of "the duty to respect and protect the rights of the human embryo". Behind this rhetoric lies a wholly unreasonable demand – that women's control of their own bodies should be subject to a religious veto. As Oliver Kamm has written, the impact of this would violate "personal liberty, the exercise of conscience, women's rights and the sanctity of family life".

And the church's support for the status quo on assisted dying would mean people facing intolerable and incurable suffering would be unable to seek help to end their lives if they so choose. Decisions over assisted dying and reproductive rights should be based on medical ethics and personal autonomy, not religious dogma.

The church doesn't just have a limited view of 'dignity', which would justify the denial of rights to those who don't abide by its teachings. When it urges politicians to value the family, its website makes clear that this is based on "monogamous marriage between a man and a woman". This outdated vision excludes many Scots – most obviously those who are LGBT, or those who have children without being married.

At election time candidates or parties may be tempted to pander to religious interest groups in the hope of benefiting from a perceived block vote. The bishops' positions should be a reminder of the risks of doing that. If they want to promote the interests of Scottish society as a whole, Scotland's politicians should ensure regressive religious demands don't hold sway over their decisions.