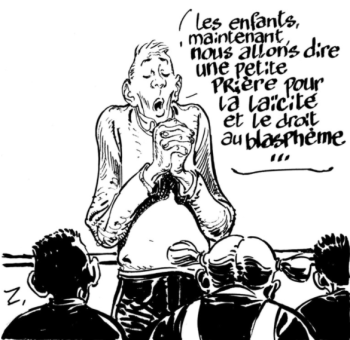 The French satirical magazine Charlie Hebdo has been the target of terrorist attacks in 2011, 2015, and 2020. All of the attacks were motivated by its publication of cartoons of Muhammad, whose depiction is prohibited in some of interpretations of Islam. The January 2015 attack on Charlie Hebdo and a Jewish supermarket left 17 people dead.

In October French middle-school teacher Samuel Paty was beheaded by an Islamist. He was targeted for teaching about freedom of expression, and using a Charlie cartoon in class. Since then much discussion in the Anglo-Saxon media has focused on the perceived shortcomings of French secularism, rather than on the threat posed by Islamist intolerance.

In light of the killing Charlie Hebdo's latest edition, marking the sixth anniversary of the 2015 attack, was dedicated to the teaching and promotion of critical thinking. In this edition Inna Shevchenko interviewed National Secular Society chief executive Stephen Evans. This is reproduced here in English with kind permission.

Cartoon translation: 'Children, now we will say a little prayer for secularism and the right to blasphemy'

Charlie Hebdo: The French principle of secularism is often attacked by those who praise the British approach to religion and what are called "multiculturalism policies". Is secularism so unpopular in the UK?

Stephen Evans: We don't have secularism in the UK. We have a state church, and the queen is both head of state and the supreme governor of the Church of England. Sessions of the British parliament begin with prayers, and there are seats in the House of Lords reserved for bishops, who have influence and power over legislation. Public money is used to fund religious schools across the country – one-third of state-funded schools in the UK are now religiously oriented 'faith schools'.

And over the years, as society has diversified, instead of adopting secular principles, we have adopted a multi-faith model that extends privileges to all religions alongside the Church of England. The National Secular Society has long campaigned for a model closer to French secularism, but what we have here is very different.

I suppose adopting the multi-faith model was politically less risky than separating state from churches?

The model is very much the legacy of having an established church. Given the church's political role and influence and the fact that the monarchy is closely linked to the Church of England, it was indeed easier to extend privileges to other denominations rather than to strip the church of its status and privileges.

The Church of England is quite happy to share privileges with other religions, as it recognises that this is the only realistic way to preserve its own privileges. For example, the church is one of the most enthusiastic proponents of reserving seats in in the legislature for representatives of other religious communities, alongside its 26 bishops which already have automatic seats in the House of Lords.

But, most of the population is secular in outlook, and the majority of people don't actively practice a religion or hold religious beliefs. We need to embrace diversity and build an inclusive society, but that does not justify our policies and our education system or anything else being organised around religious identities.

Your organisation is leading an active campaign against public religious schools across the Channel. What is the influence of religions on the British education system?

This is another legacy issue that really dates back to 1944, and the passing of the Education Act, which brought about massive school reform in post-war England and established a national education system. This law established a system of publicly funded religious schools.

Many faith schools now select children on the basis of the religious activities or beliefs of their parents, and hire teachers based on their religious identity. These discriminatory practices are allowed because, even in the Equality Act of 2010, specific exemptions have been introduced so as not to provoke conflict with religious schools.

In addition, many independent schools have a religious orientation. And there is then a third category of establishments: illegal religious schools. They are not registered and function not really as schools at all but as indoctrination centres, where priority is given to religious education – to the detriment of secular education.

This is a difficult problem to solve. Homeschooling is permitted in the UK, and when illegal schools are closed children very often go on to be home schooled. We know that France is currently trying to tackle this problem. It is certainly easier to do this within a secular system. It will take political will.

The UK is also the only Western democracy to impose compulsory worship in all schools, which is an anomaly. How do religious ideas influence school curricula?

Keeping with this outdated model rather than replacing it with a civics education course, as we are proposing, the UK is undermining important values ​​in education. Especially with the explosion of fake news and conspiracy theories spreading all over the internet, it is very dangerous to teach children to accept information on the basis of pure faith. The influence of religion in education is, I think, a factor in the failure to teach critical thinking and freedom of expression which are vital for society. France is very robust and successful in defending its republican values, secularism, freedom of expression, while here we're almost apologetic about promoting these principles.

Recently, however, the University of Cambridge rejected a proposal to curtail freedom of expression at the university. It was about requiring faculty and students to be "respectful" of divergent opinions and diverse "identities". The vote against this proposal marked a reaffirmation of freedom of expression on campus and in education. Can we keep the hope that progressive ideas will eventually triumph over religious and identity politics?

I'm optimistic by nature, and our work will continue but, today, I am somewhat pessimistic. There are too few people and organisations in the UK willing to stand up for freedom of expression. We have gone too far in wanting to protect people from being offended.

Our organisation was one of the few to publish Charlie Hebdo cartoons out of solidarity. Too often the focus is on respecting each other's opinions, rather than respecting diversity of thought and valuing freedom of expression.

There is a difference between respecting the right of individuals to express themselves and respecting their opinions. Cambridge academics emphasised that all opinions should be tolerated, that everyone should be allowed to speak out, and that everyone's opinions and beliefs can be challenged.

Being offended is the price we pay for living in a free society. Too few of us defend this idea in the UK.

Charlie Hebdo is a French satirical magazine. The views expressed in our blogs are those of the author and may not necessarily represent the views of the NSS.