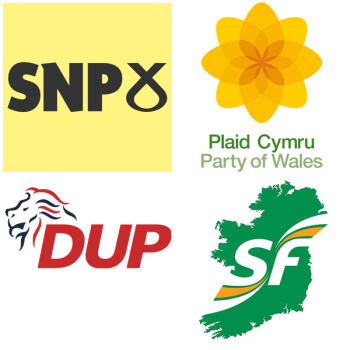 Our previous 2019 election blog examined the manifestos of the major national parties. Since then, the Scottish National Party, Plaid Cymru, Democratic Unionist Party and Sinn Féin have published their manifestos.

Let's see where these parties of Scotland, Wales and Northern Ireland stand on secularist issues.

Reforming the House of Lords

The SNP, Plaid Cymru and DUP have proposed different reforms to the House of Lords that would have implications for the 26 unelected bishops there.

The SNP would abolish the House of Lords entirely. Plaid Cymru would reform the Lords so it becomes directly elected, which in theory would mean the bishops' bench would go.

The DUP would reduce the size of the House of Lords, and two-thirds would be elected. If removing the bishops' bench featured as part of this downsizing, this would be welcome. However, there's no indication that the DUP's plans would get rid of the bishops – and if they did not, it would result in the bishops gaining an even greater proportion of power in the Lords.

The DUP also says it would reform the practices and traditions of the House of Lords "to reflect the changes in its representation". The NSS would in theory agree, and suggests abolishing parliamentary prayers to reflect the fact the UK population is growing more religiously diverse and irreligious. But considering the DUP's strong Christian alignment, this probably isn't what it has in mind.

Both the SNP and Plaid Cymru emphasise human rights and equality in their manifestos. Both say they will protect the Human Rights Act, and the SNP says it will resist any attempt to withdraw the UK from the European Convention on Human Rights. The SNP also wants to incorporate the United Nations Convention on the Rights of the Child into domestic law, which could have implications for collective worship, faith schools and infant male circumcision.

Both parties indicate they will promote LGBT+ equality. In particular, the SNP will work to reform the asylum system for LGBT+ people escaping countries where homosexuality is criminalised.

Sinn Féin's manifesto expresses approval of the changes in law to allow same-sex marriage. It also voices support for the victims of institutional abuse uncovered in the 2014-2016 Historical Institutional Abuse (HIA) inquiry, several of whom were abused in Catholic institutions. This makes Sinn Féin's manifesto the only one out of all of those examined by the NSS to address the issue of clerical child abuse.

The DUP's manifesto has a section entitled "Defending Fundamental Human Rights", but its content is disturbing. It focuses exclusively on the rights of "Christians and other faith groups". This not only excludes the rights of the nonreligious, but fails to register any other human rights issues aside from religious freedom. This would suggest the DUP in fact prioritises the ability to practice one's religion above any other human rights considerations – an outlook that is decidedly hostile to human rights.

Only Sinn Féin expresses support for reproductive rights in its manifesto, calling the criminalisation of abortion an "injustice". It indicated it would respond to the consultation on a new legal framework for abortion services in Northern Ireland, promoting "access to compassionate health care for all women".

In stark contrast, the DUP says "Let's Protect Mothers & Unborn Life Again" as one of its pledges in its 12-point plan for Northern Ireland. It says the "dangerous vacuum of law and guidance" in the wake of the vote to lift the abortion ban in NI must be "matched by promoting a culture of choosing life". This is consistent with the anti-abortion beliefs of the Free Presbyterian Church of Ulster, to which the DUP is strongly linked.

The SNP and Plaid Cymru have both said they will tackle bigotry and hatred. This is admirable – but there are free speech issues to consider in their methods. Both parties have adopted the All Party Parliamentary Group on British Muslims' definition of Islamophobia, which could lead to the silencing of criticism of Islam.

The SNP wants to appoint a new independent online regulator which would be able to impose heavy fines and block access to sites that fall foul of guidelines on online content. While this may help combat serious problems such as online grooming and radicalisation, it potentially poses a threat to freedom of expression online if used without extreme care.

Plaid Cymru's manifesto also pledges to tackle online hate, which again could cause similar problems if 'hate' is defined too broadly.

Time up for the bishops' bench?

When we look at the policies of all these parties, and the national parties examined in the previous blog, there are predictably a variety of responses to secularist issues. But one particular issue stands out as having support from almost every party across the political spectrum and across the UK – and that is reform of the House of Lords.

Excluding Sinn Féin which rejects Westminster's jurisdiction entirely, all but one party acknowledges the House of Lords no longer serves the needs of our 21st century democracy. All but one party advocates some kind of reform, from including more elected Lords to the complete abolition of the upper house. In most scenarios presented by the parties, their proposals would likely necessitate removal of the bishops.

The only party that doesn't seem serious about modernising the House of Lords is the Conservative Party. But is its current position sustainable, given the demonstrable appetite for change? If the Conservatives return as the next government – and current polls suggest that's likely – they'll have to consider whether they want to be seen as democratic and fit for the 21st century. And an obvious place to start is to scrap the anachronistic, undemocratic and unfair bishops' bench.