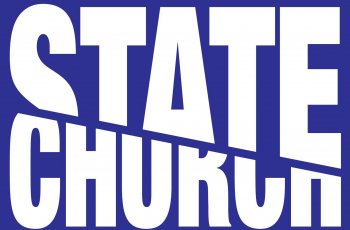 As affiliation to Anglicanism continues its rapid decline the Church of England's privileges are increasingly unsustainable, says Stephen Evans. Let's disestablish the church and embrace a secular state.

Data released by the Church of England this week reveals that the long-term decline of the so called 'national church' continues apace.

According to the figures, just two per cent of England's population are regular churchgoers. The startling numbers paint a picture of declining church attendance as well as falling numbers of baptisms, marriages and funerals held in churches.

Between 2014 and 2018, the number of regular attendees at C of E church services fell by two per cent to just one in 50 people. Overall church attendance has declined between 10-20% in the last decade.

Only 1.5% of the population attended church in an average week in October 2018. The typical 'middle-sized' church had just 27 attendees for Sunday services. Just 13% of these were children under 16.

It's therefore not hard to see why the Church of England puts schools at the very centre of its mission. Without the ability to access school pupils, the C of E would have little opportunity to evangelise to impressionable young minds.

Despite the overall decrease in church attendance, the C of E said there were "high levels of involvement with schools". Forty-four percent of churches reported that a member of their church ministry led an act of worship in schools at least once a month during 2018.

This all means the vast majority of children who are worshipping are doing so in school time. By maintaining a legal requirement on schools to hold acts of worship, the state is very much facilitating and assisting the church with its mission.

It's time to call time on this cosy and wholly inappropriate relationship.

These latest figures reveal the glaring inequity of having the state and the church bound up with each other. The significant privileges enjoyed by the Church of England are no longer justifiable or sustainable. Anglicanism is not the national religion and the inevitable consequence of that should be disestablishment. It's time for everyone to stop pretending otherwise.

In an increasingly atheistic and religiously diverse society, a neutral secular state – which guarantees freedom of religion or belief for all, but eschews religious favouritism – is the obvious model to embrace.

As Britain reconsiders its relationship with the European Union, now is the moment to get our constitutional arrangements in order by reviewing the over 400-year-old settlement of established religion.

Religious leaders will howl in protest, but the faithful have nothing to fear. Far from the negative and anti-religious worldview that it is often presented as being, secularism provides the best political framework for ensuring freedom, tolerance and equality for all citizens, religious and non-religious alike.

Of course, the bishops who enjoy the benefits of religious establishment – not least their automatic seats in the House of Lords, which give them political power and prestige – will defend it energetically.

But many in the pews will recognise that disestablishment could bring benefits to their ailing church. Away from the established church, many churches in the UK are experiencing growth. Independent from the state, the Church of England might enjoy a new lease of life.

Polling consistently shows that more oppose than support the idea of the UK having an official state religion. Sixty per cent of UK adults agree that religion should be kept separate from government policies. This includes 81% of the religiously unaffiliated, 59% of Christians with 'low levels of commitment' and 55% of Christians with 'moderate levels of commitment'.

Even Justin Welby, the archbishop of Canterbury, has admitted that disestablishment would not be a disaster. Speaking last year, he said the removal of the church's privileges should be "a decision for parliament and people". Quite right.

It's time the people started calling on parliamentarians to push for a new constitutional settlement that reflects the opinions of the population – and brings an end to religious privilege.