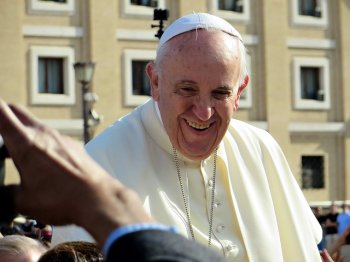 One of the pope's Christmas messages urged clerical abusers to hand themselves in. Keith Porteous Wood asks how effective it will be in bringing perpetrators to the courts and assesses the pope's progress over abuse.

Pope Francis's Christmas address to the Curia called on abusers to "hand yourself over to human justice" and he warned them that "the church will spare no effort to do all that is necessary to bring [you to] to justice."

On the face of it, this recognises the gravity of the abuse that has taken place in his church and makes a positive move to right the injustices of the past. If only. Given the pope's past form, it is much more likely to be just another PR stunt aimed at generating some positive media coverage; yet another "someone else should do something". And how likely is it that perpetrators who for decades have evaded justice, not least because they have been protected by their superiors, would voluntarily turn themselves in now?

Rather better would be for Francis to direct that all credible evidence of such abuse to be made available to secular authorities. (By decree, the Vatican itself has it all.) That just might amount to "spar[ing] no effort to do all that is necessary to bring [perpetrators] to justice".

But what kind of justice? He did not say, and I expect did not mean, secular justice with the prospect of custodial sentences. Under Francis, the Catholic Church's "justice" is increasingly an all-expenses-paid lifetime of penance and prayer, rather than a dismissal from the clerical state meted out by his predecessor, albeit too infrequently.

According to the recently published book The Dictator Pope, Francis has quietly reduced sanctions against a number of paedophile priests, one of whom, Mauro Inzoli, was subsequently convicted by secular courts. The book also makes a detailed case that casts further doubt on Francis's contention that he knew nothing of clerical abuse in Argentina, where he served the church for decades.

In the last year, this pope has been criticised more than any other over the church's clerical abuse of minors and has been personally chastened for his own failure of management. It is no longer sensational news when archbishops or cardinals are criminally convicted or found to have been promoted repeatedly despite (hopefully not because of) rampant abuse or at least covering it up.

He was berated by the prime minister of Ireland in front of the world's media in a "blistering speech focusing on the failings of the church". No pope has been so humiliated in living memory. Almost as a bad was him having to admit to "grave errors" in judgment and personally apologise for having tried to discredit the victims of an abusive Chilean priest, despite there being proof of the pope having credible evidence of this abuse.

The previously ultra-loyal National Catholic Reporter described the above as "at least shameful", adding: "At the most they suggest that Francis now could be complicit in the cover-up". It noted that even Cardinal O'Malley, president of the pope's commission for the protection of minors, had criticised him over this. "When Pope Francis's friends start making remarks like that, the wheel has come off the Francis bandwagon."

CNN concludes that "2018 became the Catholic Church's year from hell".

Incredibly, while Francis mentioned abuse in his address to the Curia, he ignored it in his Christmas address to the world at large. This led the Boston Herald to ask, tongue-in-cheek, whether it was "a signal from Pope Francis that he has moved on from the unpleasantness of that clergy sex scandal and cover up?" Is it conceivable that the pope has not realised that his papacy will be defined by his success or failure over abuse?

The New York Times has no doubt. "Many people close to victims of abuse have said that this could be the last chance for Francis, for whose papacy they had such high hopes when he was elected in 2013, to salvage his reputation on the issue."

Most damning of all was a remark made to me by one of the two abuse survivors on the papal commission, both of whom have resigned in disgust. I was told that Francis had actually gone out of his way to avoid engaging with the commission when they met. I empathise with the despair of survivors. As well as shielding perpetrators, the fabulously wealthy church continues to this day throughout the world to deny survivors appropriate compensation.

All we have seen from the pope on abuse is meaningless apologies, calls for others to act and impotent gestures, perhaps aimed to mollify the media – not to mention an attack on the UN for its expert recommendations. As I have noted previously, his tribunal to discipline bishops and his commission have achieved nothing positive. They may even have been designed to fail.

The 82-year-old is showing the strains of nearly six years of his papacy and may have left it too late. Worse, many reading the above will understandably ask whether he even wants to sort it. And even if he does, I suspect the ungovernable Vatican would not let him do so.

The only optimistic spot on the horizon is a conference in Rome in February of worldwide Catholic hierarchy "to address the abuse and protection of minors". The NSS will set aside our scepticism and, in the interests of survivors, put forward suggestions to make it as successful as possible.

But we are not holding our breath.