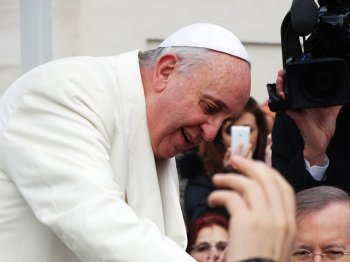 As the pope prepares to visit Ireland, NSS president Keith Porteous Wood says the international community must confront the Vatican over its shameful record on child abuse and demand action to bring secular justice.

Forty years ago, mass attendance per capita in Ireland was, by some margin, the highest in Europe and possibly the world. Now attendance is less than three percent of the population in some Dublin working class parishes and a projection of Dublin mass attendance dropping by a further 30% by 2030 is described as "optimisitic".

A major factor behind these plummeting numbers is that Ireland also holds the dubious record of having suffered the highest per capita level of Catholic clerical abuse in the world. (Incidentally, a major contributing factor was the complete absence of secularism.)

That abuse itself may be largely historic, but barely a month goes by without a reminder that the serious legal and financial ramifications are far from resolved. Just last week, reports revealed the Irish government was defying the UN Committee Against Torture in its endeavours to hold the state to account over abuse relative to the (overwhelming Catholic) Magdalene Laundry slave camps. I suspect the motive was financial.

And, true to form, the shameless church does all it can to avoid taking tangible responsibility for the many lives it ruined. It has failed to pay even the ludicrously discounted settlements it has agreed to make. It has so far paid only 29% of the compensation it offered in 2009, short-changing the Irish state and taxpayers of almost €250m.

The pope will therefore have to confront a great deal of anger in Dublin against the church in Ireland, and the visit comes after the worst months in the church's history after revelations worldwide about child abuse among the hierarchy. These include the dismissal of a cardinal – a former archbishop of Washington who had been promoted when others knew of his abuse, and the forced resignation of the archbishop of Adelaide, after he was convicted of concealment of abuse and the Australian premier demanded it. A court has decreed that George Pell, Vatican treasurer and former archbishop of Melbourne, stand trial in Australia on sexual assault charges.

The Dublin visit is already in disarray with keynote speakers Cardinals O'Malley and Wuerl pulling out because of abuse crises in the US.

As well as having to field criticism on an unprecedented level of the church in Ireland and worldwide, the pope is facing attacks focused on himself – not before time, and with good reason. I cite just a few of many possible telling examples.

He claims to have handled no abusive priests in Argentina before becoming pope. According to the respected bishop-accountability website this claim is "implausible".

During his papacy UN experts produced in 2014 Concluding Observations on children's welfare, particularly relative to abuse. The Vatican impudently rejected this, even attacking the authors.

The "commission on abuse" that he created has achieved nothing and the only two survivors appointed to it have resigned in disgust. The tribunal he created to provide the illusion of action against bishops, who should instead have been subject to criminal law, has been "quietly scotched".

In his latest letter to victims seeking forgiveness he does not even mention bishops, despite the recent scandals involving them. These include him sacking a cardinal and former archbishop of Washington who had been promoted when others knew of his abuse, and the archbishop of Adelaide after he was convicted of concealment of abuse. A court has decreed that George Pell, Vatican treasurer and former archbishop of Melbourne, stand trial in Australia on sexual assault charges.

The net is finally closing in on the Catholic Church after centuries of covering up clerical abuse, letting perpetrators go free and denying compensation to victims. Francis, just like his predecessors, has resorted to the same tactic of issuing unconvincing apologies and then doing nothing. The public at large and now even Catholics in the pews are wearied by such meaningless papal apologies and now want action - action that will bring the guilty to secular justice and recompense to victims.

The National Secular Society has called on the international community to insist that the Vatican:

The NSS has also called on the international community to remove time bars on abuse cases and to introduce everywhere mandatory reporting of institutional abuse, including that disclosed in the confessional. The church has brazenly opposed such measures.

I have written to the Irish prime minister accordingly.