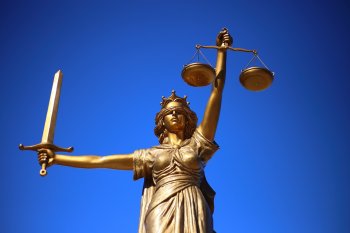 Irish voters decided this week to remove the 'crime' of blasphemy from its constitution. The majority of citizens, irrespective of their personal beliefs, clearly recognised that laws criminalising blasphemy have no place in a modern democracy.

Except apparently they do – at least according to an alarming new ruling from the European Court of Human Rights. The Court has ruled that Austria didn't breach a woman's right to freedom of speech when it convicted her for calling the prophet of Islam a paedophile.

A 47-year-old woman from Vienna, identified only as E.S., claimed during two public seminars in 2009 that the Prophet Muhammad's marriage to six-year old Aisha, which was consummated when she was nine – was akin to pedophilia.

For stating this, she was subsequently convicted of 'disparaging religious doctrines' in a manner capable of 'arousing justified indignation'.

If anything should arouse justified indignation, it's this ruling.

The European Court ruled that Austrian courts had "carefully balanced her right to freedom of expression with the right of others to have their religious feelings protected." This is dangerous territory. Surely if we grant anyone the right not to be offended, that's the end of free speech?

Article 10 of the Convention of Human Rights guarantees the right to freedom of expression. This includes the freedom to "hold opinions and to receive and impart information and ideas without interference by public authority and regardless of frontiers".

The European Court has justified its ruling on the basis that freedom of expression carries with it duties and responsibilities. It argued that Austria is best placed to evaluate which statements were likely to 'disturb the religious peace' in their country.

And this is the crux of the matter. The West now lives in fear that open, robust and sometimes even factual discussion about Islam inevitably leads to violence. Austria argued that the prosecution pursued the aim of "preventing disorder by safeguarding religious peace, as well as protecting religious feelings".

This ruling infantilises Muslims. It says that suggesting Muhammad had paedophilic tendencies will "arouse justified indignation" in Muslims leading to 'disorder'. It suggests one particular section of society isn't capable of handling the kind of robust discussion that free societies have become accustomed to.

The criminalisation of this kind of speech is at the same time a craven surrender to religious extremism. The death threats against Salman Rushdie heralded the start of the current malaise. Despite all the empty rhetoric of #JeSuisCharlie, the bloody murders of cartoonists and journalist for 'insulting Muhammad' have further weakened our resolve.

Instead of standing firm in the face of threats to our hard-won freedoms, we are slowly but surely acquiescing to Islamist demands for a special consideration of Muslims' religious feelings. Anything for a quiet life. But don't expect one.

With rising anti-Muslim sentiment across Europe it is easy to understand why some people might be inclined to try and achieve harmony through suppression of speech. But this approach is clearly backfiring. The far-right is only strengthened by being able to claim victimhood on the basis of being silenced. Every free-speech martyr swells their numbers and drives ordinary decent people into their ranks.

The Court's ruling doesn't create a new blasphemy law, but it is still nevertheless a win for those seeking to establish a worldwide 'defamation of religion' law. For many years, the Organisation of Islamic Cooperation's (OIC) has sought to stifle any expression which violates Islamic censorship norms by gathering support for a global blasphemy law. By upholding Austria's conviction of a woman for "insulting a person who is the object of veneration by a religious community", European judge's have bolstered their cause. The OIC, which consists of 57 mainly Muslim Majority countries, claims to work to "safeguard and protect the interests of the Muslim world in the spirit of promoting international peace and harmony". But naturally, it's peace and harmony on their terms.

The judgment will also be music to ears of the UK's Muslim Action Forum which a few years ago launched a campaign called "Be Careful With Mohammed" ('or else' being the implication). The campaign marked the start of a "legal strategy" to stop "insults" against Mohammed make "Islamophobia" a criminal offence. They're going to love this ruling.

Any decent person should have an interest in promoting civil dialogue and good manners. But these values can't be enforced by the law. Now more than ever we need to preserve and strengthen freedom of expression, not capitulate to extremist demands. That's why the European Court's ruling is dangerous and regressive development.

The case should be referred to the Grand Chamber for fresh consideration.