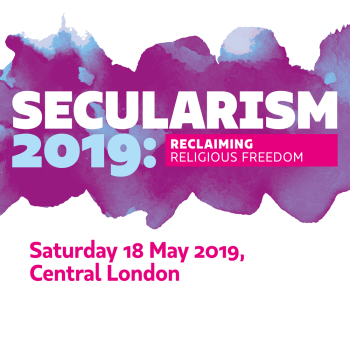 There is an urgent case for resisting those who claim the mantle of 'religious freedom' without regard for others' rights and freedoms. Here's why our Secularism 2019 conference will be held under the tagline 'reclaiming religious freedom'.

"Everyone has the right to freedom of thought, conscience and religion; this right includes freedom to change his religion or belief and freedom, either alone or in community with others and in public or private, to manifest his religion or belief, in worship, teaching practice and observance.

Secularists don't believe in perfect laws. If we did, we'd be theocrats. And Article 9 of the European Convention on Human Rights (which is also Article 9 of the Human Rights Act) leaves plenty of room for interpretation. But it is also a pretty good law for two simple reasons: it makes clear that religious freedom is both a qualified right and a right for everyone.

Too often religious groups take the language of 'religious freedom' to mean something very different. They present it either as an unqualified right or as a right for people like them alone. This is why, when we decided to hold a major one-day conference on 18 May next year, we also decided to give it the tagline 'reclaiming religious freedom'.

No right is absolute. And religious freedom does not give individuals or well-organised groups the right to circumvent the laws that apply to everyone else. If laws and rules are important enough to have in the first place, they are important enough for everyone to follow. So should religious freedom bring the right to cut animals' throats without stunning them, refuse to serve gay people or behave unprofessionally at work?

And religious freedom is for all. That includes those who wish to go to a church, mosque, synagogue or temple without fear of harassment, intimidation or violence. The freedom to believe and worship as you wish does sometimes come under threat from genuinely militant atheists – China's anti-religious policies are the most obvious international case in point – or bigots with no religious affiliation.

But usually the gravest threats to religious practice come from theocrats. In India the Hindu nationalist government is cracking down on Muslims. Across much of the Middle East Islamists persecute Jews and Christians. Rising Christian nationalism in the US and Jewish nationalism in Israel threaten religious minorities. And such international tensions are often reflected within communities here in the UK.

Religious freedom must also include freedom from religion. How can we ensure people have the freedom to reject theocrats who try to police LGBT+ people's sexuality, women's reproductive rights or the autonomy of the terminally ill? How can we ensure they can discuss religion, theocracy and theology openly and imperfectly, whatever our personal views on the religions in question?

And how can we make sure religious freedom includes the freedom of children to grow up and make their own minds up about religion when they are old enough? The bastardisation of the term 'religious freedom' has allowed religious lobbyists licence to discriminate against children, indoctrinate them in faith schools, impose religious worship and dress on them, and even modify their genitals.

The challenge is all the tougher because those who stand up for children's right to an education that enables them to think for themselves, or their right to grow up in intact bodies, are shouted down as bigots. Meanwhile the religious lobby gets away with it.

If secularists do not act, 'religious freedom' will be defined for us in the public imagination. In the US the attorney general Jeff Sessions has just announced a 'religious liberty' task force. Far from standing up for the religious liberty of all, the task force is specifically designed to combat what Sessions called "a dangerous movement" – in other words, secularism.

In the wake of the legalisation of same-sex marriage equality in Australia, an inquiry into 'religious freedom' has helped religious groups to make the case for wide-ranging exemptions from anti-discrimination laws. And the new prime minister has made clear his sympathy for their argument. MPs in the UK cite an absolutist view of religious freedom, with no apparent regard for the common good or the conflicting rights that may be trampled on in the process.

The group Agenda Europe, which is co-ordinating ultra-conservative Christian efforts to restrict LGBT+ and women's rights across Europe, is presenting its arguments in the language of human rights. And with the multiculturalist approach to public policy so ingrained in the western conscience, it seems unlikely that Christian fundamentalists will be the only ones adopting similar tactics to impose their beliefs.

Religious freedom is a qualified right like any other, and it's a right for all. Next year we'll be discussing what genuine religious freedom looks like, and how to help make it a reality. Please join us on 18 May to hear more and contribute to the discussion. 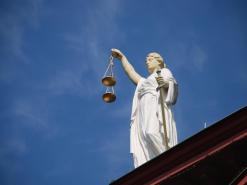