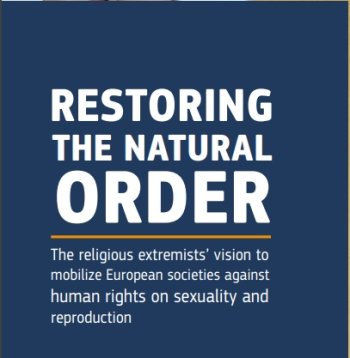 A coordinated effort by ultra-conservative Christian groups to restrict LGBT+ and women's rights across Europe has already had some success, a report has revealed.

The report from the European Parliamentary Forum on Population and Development (EPF) outlines the strategy of a group called Agenda Europe, a Vatican-inspired professional advocacy network.

EPF cites recently revealed documents which show the group has "a detailed, extremist strategy called Restoring the Natural Order: an Agenda for Europe".

The strategy seeks to overturn existing human rights related to sexuality and reproduction, including: the right to divorce; women's rights to access contraception, assisted reproduction technologies or have abortions; equality for lesbian, gay, bisexual, trans or intersex people; and the right to change one's gender or sex without fear of legal repercussions.

EPF's report says the strategy "is producing concrete results". It cites bans on same-sex marriage in "several central European countries", "over a dozen comparable acts at national level and in European institutions aiming to limit women's and LGBTI rights" and a bill which attempted to ban abortion in Poland.

According to the report Agenda Europe has attracted over 100 anti-human rights, anti-women's rights and anti-LGBT+ organisations from over 30 European countries since 2013. Its members meet in secret.

Restoring the Natural Order says it is based on "a natural law, which human reason can discern and understand, but which human will cannot alter". It adds that "the task and purpose of all positive legislation" is "to transpose and enforce" this law.

It identifies three major areas for campaigners to target: "marriage and the family", "the right to life" and equality and anti-discrimination law. It also says they should "not be afraid to be 'unrealistic' or 'extremist' in choosing our policy objectives".

The group is aiming to ban same-sex marriage, divorce, gay adoption, the pharmaceutical sale of contraceptives, ante-natal diagnostics and IVF. It aims to introduce anti-sodomy legislation and bans on "gay propaganda" alongside international bans on abortion, stem cell use and euthanasia. And it is seeking the abolition of equality legislation.

It has also identified non-legislative actions including the revision of sex education classes, introducing government-funded 'pro-life' abortion counselling and supporting resolutions against surrogacy.

The strategy says campaigners should aim to "debunk the opponents' claim to 'victim status'", malign opponents and non-conducive institutions and build international networks.

It also says they should be prepared to frame their arguments in terms of rights. For example, it says proponents of "conscience clauses", which allow medical professionals to refuse to provide care on religious grounds, should argue that they be considered "a minimal human rights standard".

EPF says Agenda Europe is led by the Vatican but has "managed to forge consensus among all conservative, traditionalist Christian actors across Europe, spanning all denominations".

In the conclusion to its report EPF calls on "progressive actors" to "take heed that this fight is engaged and that social progress is not necessarily inevitable". It says the "next phases of this fight" are likely to be in the Austrian parliament, where Agenda Europe organiser Gudrun Kugler was elected in September 2017, and the European judicial and quasi-judicial adjudicatory mechanisms.