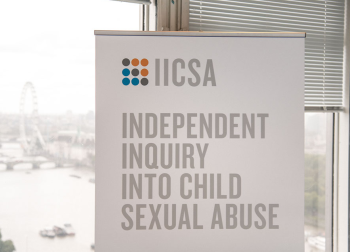 As the Independent Inquiry into Child Sexual Abuse turns its attention to the Church of England, Keith Porteous Wood says it must act on evidence which has highlighted the desperate need to hold the C of E to account.

The Independent Inquiry into Child Sexual Abuse's remit is to examine the extent to which institutions and organisations in England and Wales have taken seriously their responsibility to protect children. The first, three-week, hearing for the Church of England relates to the diocese of Chichester, within which there have been many accusations of abuse and convictions of clergy. Subsequent modules will concentrate on convicted former bishop Peter Ball and the church more widely.

Lawyer Richard Scorer delivered the opening address. He is head of abuse law for solicitors Slater and Gordon and coincidentally also an NSS vice president. He emphasised that victims' abuse had been compounded and their lives ruined by the "manipulation, blanking and lies" of the bishops.

He is highly sceptical that the Church of England can now be trusted to "mark its own homework". Such institutions, he said, are honeypots for abusers who use religion to exert power and even to justify abuse. The corporate culture is to cover up misdeeds and protect the organisation and, in so doing, institutionally compound the abuse.

Scorer detailed problems over the unsatisfactory handling of abuse accusations in the diocese of Chichester and those against its former bishop Peter Ball, who was eventually jailed for his activities. He noted with concern that diocesan bishops are not formally accountable to anyone, and therefore almost invulnerable to any redress.

He also made a case for a law requiring mandatory reporting of abuse in specific circumstances; this is common in many other European countries. Despite having supported the introduction of such a law some years ago, the church has already made clear through its counsel at the inquiry that it now wants to avoid one at all costs.

It is little wonder that such a law is viewed with trepidation in ecclesiastical circles. Evidence mounted during the week of numerous bishops having abuse reported to them and doing absolutely nothing, and then suffering from institutional amnesia.

Mandatory reporting is in force in France. The most senior Catholic in France, Cardinal Barbarin, archbishop of Lyons, will be facing a trial next month after failing to report suspected abuse by a priest for whom he was responsible. The trial follows representations made by the NSS, with the help of a French affiliate organisation, to the French Minister of Justice.

It is difficult to think of any more effective measure than mandatory reporting to break the appalling cycle of abuse which senior clerics can - and do - ignore with apparent impunity. Hopefully the Inquiry will recommend it. Having said that, the government is opposed to it, apparently because they fear the courts would be overwhelmed. If this is correct, it suggests that they think the problem is very serious indeed. Surely we should be erring on the side of helping victims achieve justice rather than helping their abusers escape it? And in the longer term, such a law would reduce caseloads by reducing abuse.

Another powerful speaker was Phil Johnson, Chair of MACSAS, a survivors' organisation. He told of his own life being blighted by experience of ten years of clerical abuse in the Diocese. After he reported it nothing was done for three years which allowed the abuser to target others. He lamented the failure of innumerable internal CofE reviews into the Diocese to achieve anything.

"The Church has put its own reputation and internal squabbles ahead of safeguarding", he said. With all the failures over this time "no one has been held to account, no-one has been disciplined and no one prosecuted. I think that is just wrong." He too made an impassioned plea for the inquiry to back mandatory reporting. Until it is introduced "there is nothing to stop institutions putting their image and reputation ahead of the safety of children".

A colleague in MACSAS, Ms Alana Lawrence, gave evidence which provided troubling insight into systemic barriers to abusers being brought to justice. Seemingly, even in the Anglican Church, where an abuser discloses his abuse to another cleric this can be regarded as "confessional" and therefore undisclosable. These "confessions" can take place anywhere - given there are no confession boxes in Anglican churches. And, arguably worse, those that had been forgiven for abuse considered the abuse to have been obliterated. It was "a fairly prevalent view", she said, that it was "almost as though the events for which [an abuser] was under investigation and then convicted for hadn't happened... it's gone".

This surely adds weight to Richard Scorer and others' assertion that the Church is unfit to investigate allegations of abuse in its own ranks.

My understanding is that the mandatory reporting law in Ireland does not exempt the confessional, and I hope the inquiry will make a similar recommendation for this country.

Not all the drama took place at the inquiry itself. An article in the Daily Telegraph on Monday revealed that the police and CPS were investigating former archbishop of Canterbury Lord Carey for possible misconduct in relation to allegedly steering the police and CPS away from prosecuting Peter Ball in the 1990s.

Soon after, the Telegraph ran a story about a letter it published written by some conservative evangelicals from Christian Concern and so-called Anglican Mainstream, blithely opposing even any investigation on the absurd grounds that it was an "attack" targeting those of Lord Carey's conservative theological persuasion. To his credit, Rev Mark Woods at Christian Today treated this with the contempt it deserved. The letter was wearily reminiscent of Lord Carey's own proposal some years ago that cases with any religious involvement should be dealt with in special courts. Rather more Iran than "one law for all".

A BBC Inside Out investigation broadcast in Yorkshire and Lincolnshire during the week featured survivor Matt Ineson detailing multiple abuse twenty years ago by a vicar who gave him shelter when Matt became homeless after a family breakdown. He discloses how he complained to several bishops and an archdeacon (now a bishop) and the Archbishop of York, John Sentamu. Dr Sentamu apparently refused to act on the complaint, saying it was a matter for the diocesan bishop (who had ignored it). The Church issued a defensive statement, without even consulting Matt.

Matt disputes the accuracy of the Church's statement and before the week was out, he called for episcopal and archiepiscopal resignations.

This is just the first week of the first segment of the abuse inquiry's examination of the Church of England, but I must congratulate those making the case so bravely and eloquently that the church cannot be trusted to keep its own house in order. I've argued as much for years.

The dysfunction within the CofE's own ranks was laid bare this week, not least by the church's own recent actions. So far the church seems blind to this dysfunction, but recognition of it is a prerequisite for desperately-needed reform. Let us hope the inquiry was listening perceptively and acts accordingly.