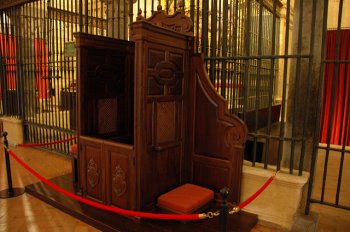 The Australian abuse commission is right not to exempt the confessional from reporting obligations, and its rigour should provide a model to reverse the backsliding already all too clear in the UK, argues Keith Porteous Wood.

Should priests be legally bound to report instances of child abuse that come to their attention through the confessional? The (Australian) Royal Commission into Institutional Responses to Child Sexual Abuse certainly thinks so. It has just issued a major report of its investigations in which 4,444 perpetrators of abuse in Catholic settings were identified. One of its numerous recommendations was to impose "a positive obligation on third parties [to report] ... in relation to child sexual abuse".

The Commission has been clear that this obligation should include reporting any admission by a perpetrator, even when it is made to a priest in the confessional: "There [should] be no exemption, excuse, protection or privilege from the offence granted to clergy for failing to report information disclosed in connection with a religious confession."

It has carefully considered the freedom to manifest religion and concluded — correctly in my opinion — that the obligation does not infringe this. It states, as is recognised by the International Covenant on Civil and Political Rights, that freely practising religion is not an absolute right and can be reasonably abridged to protect the "fundamental rights and freedoms of others".

And at least where there is a significant problem of abuse, the United Nations thinks reporting should be mandatory, without exception. The Committee for the Rights of the Child recommended in 2014 to the Holy See, where of all places it would have made clear if it wanted to except the confessional, that it "44(e) Establish clear rules, mechanisms and procedures for the mandatory reporting of all suspected cases of child sexual abuse and exploitation to law enforcement authorities". [Emphasis added.]

After the revelations of the massive level of clerical child abuse in Ireland, the UN made calls for such legislation there and, eventually, this was enacted a few years ago - without a "confessional" exemption.

Predictably the Catholic hierarchy in Australia has opposed the idea with its customary self-serving belligerence. However, if the obligation to report abuse applies to everyone, then it must surely apply to what a perpetrator says in confession.

In a recent article, subtitled Breaking the Seal of Confession Could Pit Church Against State the president of the Australian Catholic Bishop's conference is quoted from 2012: "priests will guard the sanctity of the seal of confession with their very lives. ... They would certainly undergo imprisonment rather than violate it".

And even in Ireland there was no confessional opt out; objections there were clothed in pragmatic terms "obliging priests to pass on information received from penitents in the confessional, is a fiction, since no such information will be forthcoming."

Another objection that the Church uses is that the breaking the seal of confession violates 'canon law'. But there can only be one legitimate law that decides this issue and that is the democratically-determined human rights-compliant law of the land.

Senior Australian clerics telling us they are keen, or at least prepared, to go to prison to protect child abusers is not something that will impress most citizens. Most will recognise it as an attempt by the Catholic Church to promote its own law as being superior to, and beyond the reach of, the law of the land that everyone else must obey. The Catholic hierarchy claims that breaking the confidence of confession will "make things worse". But just how much worse can it get than 4,444 clerical perpetrators that have been identified? And how many clerics must have known – whether or not via the confessional – about those thousands of perpetrators and felt justified in keeping silent, while the children continued to be abused?

One of the top lawyers fighting clerical abuse of minors and vulnerable adults, Richard Scorer, referred in his book Betrayed about RC abuse in England to the case of Father James Robinson in Birmingham. This case casts doubt on claims that confession, when not accompanied by mandatory reporting, would lead to perpetrators handing themselves in. There were three complaints about Robinson made by a boy to three separate priests in confessionals in 1972-3. Obviously these were not acted on. It was not until 2010 that Robinson was finally jailed for 21 years after decades of horrific abuse.

Reports suggest that the imprisoned Gerald Francis Ridsdale abused hundreds of children in Australia, starting from his ordination in 1961. Even he agreed with the Commission "from my experience and what I've done and the damage that I've done" that the confessor should tell the police if someone had confessed to a crime.

The Commission has seen a similar pattern and said "We are satisfied that confession is a forum where ... clergy have disclosed their abusive behaviour in order to deal with their own guilt. We heard evidence that perpetrators who confessed to sexually abusing children went on to reoffend and seek forgiveness again."

It concluded "that the importance of protecting children from child sexual abuse means that there should be no exemption from the failure to report offence for clergy in relation to information disclosed in or in connection with a religious confession."

And it looks like the Commission will prevail. As an Australian commentator has just observed "Ireland passed the Children First Act in 2015, which required mandatory reporting from clergy, and if the experience there is anything to go by, Australia may need to ready itself to punish Catholic priests who refuse to break the seal of confession."

Some in the Church have long expected this move and Juliette Hughes-Norwood, a Catholic from Melbourne wants the law to change. "Have decency — put children first, put human dignity first not your position."

Australia's Commission was large, lawyer-led and established the huge number of perpetrators. It has come out with well-considered hard-hitting recommendations including those for legislative change.

The equivalent UK body, The Independent Inquiry into Child Sexual Abuse is on a much smaller scale and after much controversy is now on its fourth chair, a social worker.

We need this inquiry that still has several years yet to run to be hard-hitting and ruthlessly forensic in its examinations. We need individuals and institutions to be made accountable and thorough concrete recommendations. It must not be a wrist-slapping exercise.

Attempts have been made at Westminster to introduce legislation covering institutional abuse, but so far unsuccessfully. The Government is not enthusiastic – surely not because it might unleash even more cases? The Anglican Church originally supported tough legislation. Whether it still does is unclear.

I hope that the impressively professional Australian report and well-thought-out recommendations will make the Government pull its socks up and put some much-needed backbone into our own work in this area. Mandate Now is an organisation pressing for effective legislation for "regulated activities" (broadly, for abuse in institutions). It is understandably concerned that the Government will quietly ditch mandatory reporting for a face-saving "duty to act", which will be unenforceable and therefore ineffective. You may wish to consider supporting Mandate Now. Above all, we all need to take every opportunity to press the Government into introduce robust mandatory reporting on regulated activities.

Readers may also appreciate this supportive story in the Guardian, written by a woman who told her priest about being sexually abused when she was 16.